We use cookies to provide you with a better experience. By continuing to browse the site you are agreeing to our use of cookies in accordance with our Privacy Policy.
Home » Your Robotic Coworker

FANUC Examines the Role of Collaborative Robots on the Automated Shopfloor

“Nobody wants to work anymore.” It’s a statement that’s been making the rounds since the start of the pandemic. Bloomberg recently reported that the real issue—that’s been around as far back as the 1870s—is that people don’t want to work for what companies are willing to pay them. The trick is providing training and career development that will keep workers from looking for their next best offer somewhere else.

This summer, we learned at Automate 2022 that robotics and automation technology is offering an opportunity to keep frontline skilled workers happier in areas where repetition and hazardous work environments tend to lead to job loss. “Most industries today, including gear manufacturers face labor issues in one or more areas of production. The jobs most affected are often tedious and can lead to repetitive motion injuries. In a tight job market, it’s especially difficult to fill jobs that people consider dull and strenuous. That’s why companies are looking for automation solutions that will allow them to resolve labor issues and increase their flexibility to quickly adapt to meet customer needs,” said Virgil Wilson, staff engineer material removal, general industry, and automotive segment at FANUC America.

The Cobot Zone: Freedom and Collaboration

FANUC recently expanded its popular series of CRX collaborative robots with the new CRX-5iA, CRX-20iA/L and CRX-25iA. The new CRX cobots complement FANUC’s existing line of CR and CRX cobots that now total 11 model variations able to handle products from 4 to 35 kg. Designed for companies looking to increase their capabilities and overcome labor issues, FANUC’s CRX cobots are extremely robust and can run for up to eight years without maintenance.

A new CRX-25iA robot, offering a 25 kg payload and 1,889 mm reach will demonstrate case palletizing. Guided by a 3DV/200 vision sensor mounted to the arm, the CRX-25iA will palletize boxes to nearly seven feet high.

A CRX-20iA/L with FANUC QSSR (Quick and Simple Start-up of Robotization) demonstrated the easy connection of a FANUC CRX cobot and a machine tool. QSSR simplifies the automation of machine tool load/unload applications using the CNC. 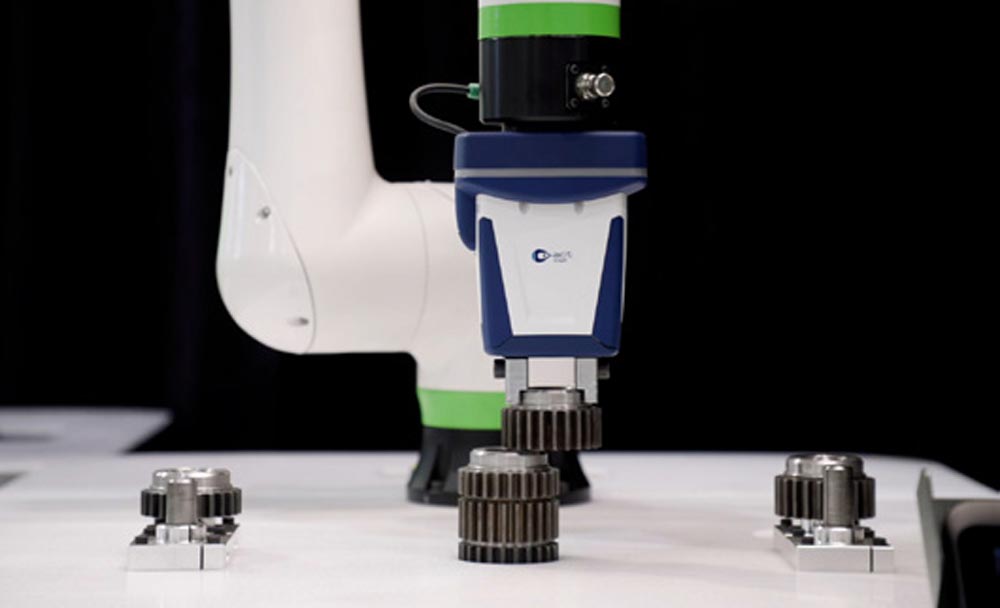 CRX cobots can detect external forces in the workspace, stopping safely when contacting a person or object. “This technology allows the CRX to work safely alongside people without the need for expensive guarding. Going forward, as more companies look for tools to assist their workforce, they will likely move towards a cobot to work within the same space as a person,” he added.

Automating some tasks with cobots allows companies to redeploy workers to help solve the current labor shortage situation. Instead of workers performing repetitive tasks, they can take on more challenging, complex, and rewarding jobs that only people can do.

“Companies all over the world are evaluating their production operations to determine how to increase productivity. That’s a key reason why the demand for robotics and automation is growing at a rapid pace. When companies reach out to FANUC, they are looking to solve some sort of production problem,” Wilson said. “We take pride in the fact that we help customers solve their problems, achieve their manufacturing goals, increase profits, and stay competitive.” 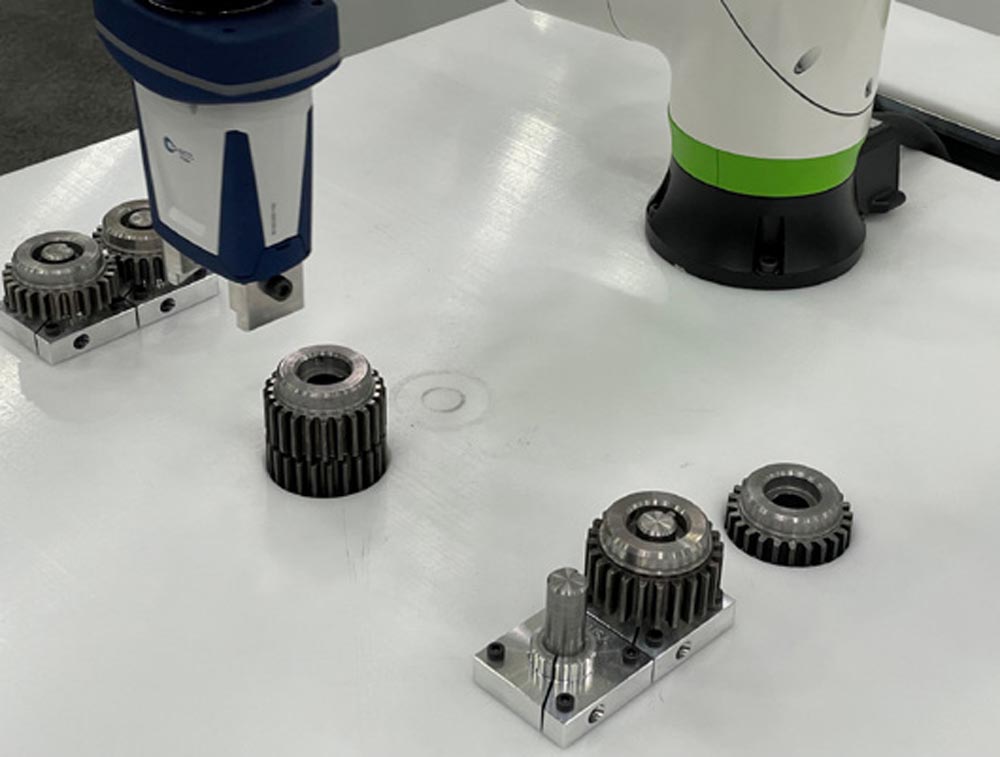 The CRX Cobot demonstrated a gear manufacturing application during Automate 2022 in Detroit.

The CRX series supports several of FANUC’s advanced features including iRVision and is a perfect fit for any company looking to achieve higher efficiencies – even those that have yet to use their first robot.

1) Assembling wire connector is one example that Force Push could be used for.

3) Force Face Matching is useful for applications requiring normalizing a part to a surface.

4) Gear assembly is one application that would use Force Phase Match.

5) Force Contouring would be useful for material removal applications, such as deburring or sanding.

“Using drag and drop icons a user can drag the desired Integrated Force Control Icon into the timeline for easy programing and visualization,” Wilson said. Easy Programming and setup allow engineers to utilize these technologies without the need for long classroom time or training workshops.

CRX cobot e-Learning training modules, for example, are available to help operators get up to speed very quickly. Online tutorials cover a product overview with features, unboxing and setup, programming and iRVision courses.

From a tablet perspective—the phase matching Tablet TP programming icon guides novice users through setup of gear meshing operations and could reduce an end-user’s dependence on a robot expert to set up new part styles.

Hand Guidance is the ability for the operator to be able to control the robot motion by guiding or leading the robot through the desired motions. “This is useful in teaching applications where the path points or paths are recorded as the user guides the robot, and in heavy lifting applications where the process requires manual placement or movement of a large part but the smooth and gentle motion of a robotic arm,” Wilson said.

The Future is Safety First

Many applications become more efficient by offloading the repetitive motion, such as picking each part, from the operator thus freeing them up for more value-added jobs. So, when the cobot goes to work, an operator can safely do other tasks in the same space, according to Wilson.

This is just a hint of what the factory of the future will soon look like. Cobots are breaking into a larger variety of applications including smaller platforms for miniature components as well as large systems capable of handling the heaviest payloads.

“FANUC’s CRX cobots are designed for every type of manufacturer—small or large—looking to expand their capabilities and overcome labor issues,” Wilson said. “With several new models introduced in 2022, FANUC now offers the most extensive lineup of easy-to-use cobots available on the market today. Cobots will continue to be extremely important for manufacturers looking to increase production output and maximize efficiency.”