We use cookies to provide you with a better experience. By continuing to browse the site you are agreeing to our use of cookies in accordance with our Privacy Policy.
Home » The Electric Steel Dilemma & Its Impact on Motor Vendors

The Electric Steel Dilemma & Its Impact on Motor Vendors

Industrial and commercial motor suppliers are at the helm of a major problem. Historically, vendors like ABB, WEG, Siemens, and Nidec have had minimal difficulty securing supply of key raw materials used in the manufacturing of their motors. Of course, there have been many supply disruptions throughout the market’s life, but very few have evolved into longer-term issues. However, we are beginning to observe one supply disruption that will likely challenge motor vendors’ ability to produce for years to come.

Electric steel is used heavily in the manufacturing of electric motors. The material is key to producing the electromagnetic field used to turn the rotor. Without the electromagnetic properties associated with this iron alloy, the performance of electric motors would be substantially compromised. Historically, motors used in commercial and industrial applications have represented a major customer base for electric steel suppliers, and motor vendors have resultingly had little difficultly ensuring prioritized supply lines. However, the share of business held by commercial and industrial electric motor vendors is being threatened by the automotive sector in the wake of electric vehicles. 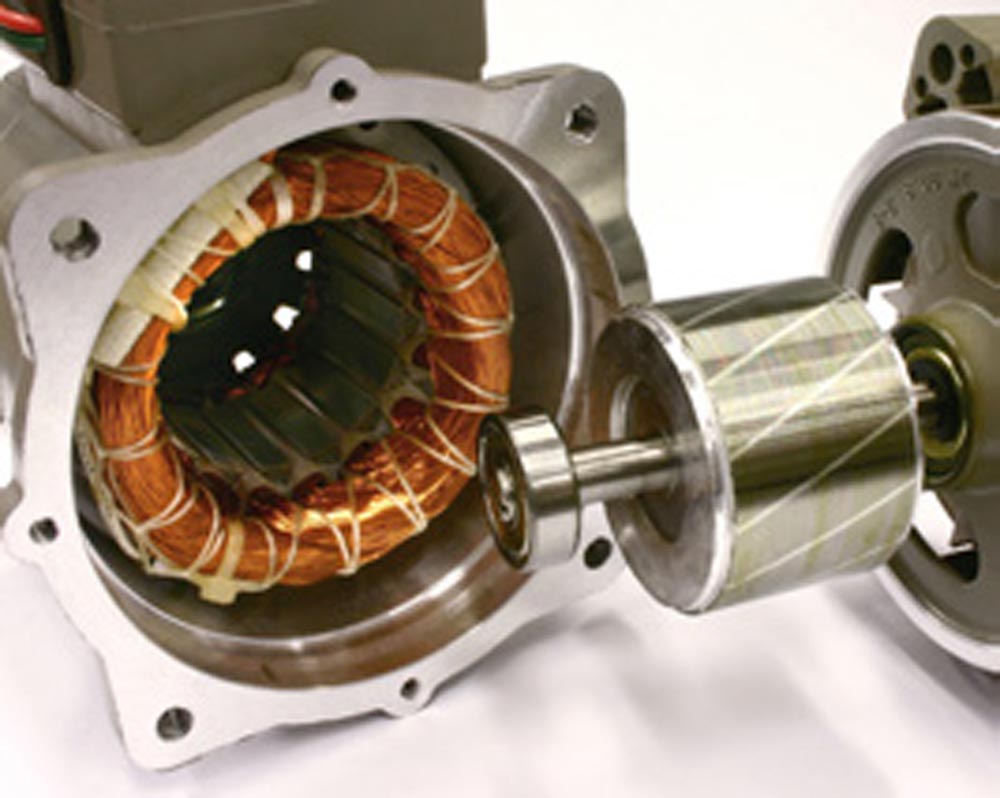 As electric vehicle production continues to grow, so does the associated demand for the electric steel used in the motors to power them. Resultingly, the bargaining power between commercial/industrial electric motor vendors and their steel suppliers is becoming increasingly undermined. As this trend progresses, it will impact vendors’ ability to secure the electric steel necessary for production, resulting in longer lead times, and higher prices for customers.

The State of This Problem Today

The process which takes place after crude steel is formed dictates the kinds of things the material can be used for. One of these processes is referred to as “cold-rolling”, which produces what is known as “cold-rolled steel”—the type used in electric steel. Cold-rolled steel makes up a relatively small portion of overall steel demand and the process is notoriously capital intensive. Resultingly, increases in production capacity are slow.

Short term COVID related supply shocks have been one reason for the price performance of cold-rolled steel. However, increased demand from the automotive sector via electric vehicles is, and will continue to be, a contributing factor to the staying power of higher prices. Within electric motor manufacturing, electric steel can make up as much as 20 percent of the bill of material. It is no surprise then that the average selling price of an electric motor is up 35–40 percent compared to January of 2020. 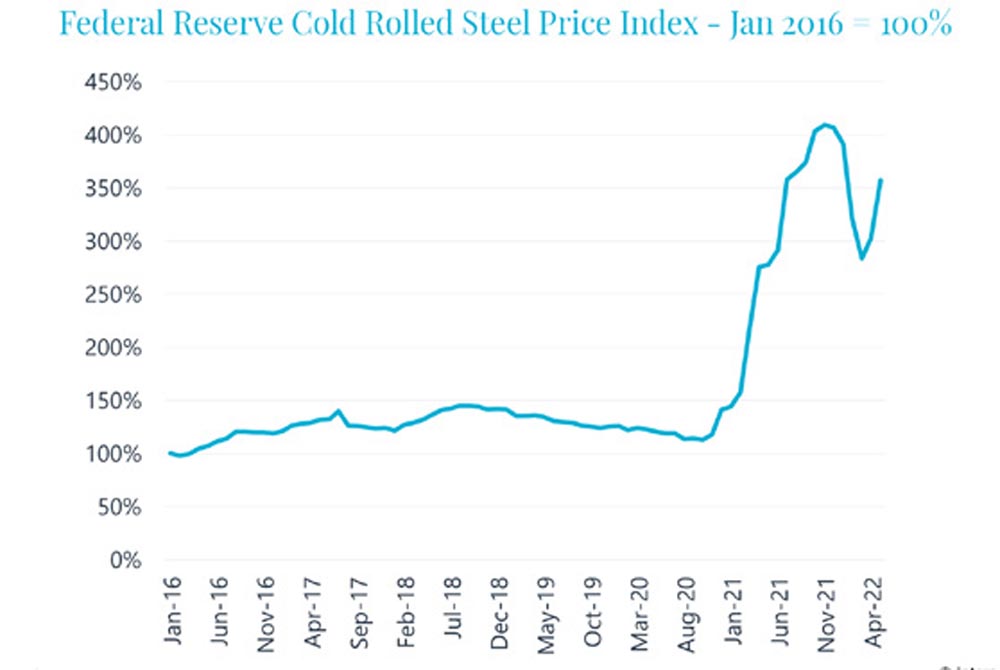 We are currently conducting interviews with commercial and industrial motor suppliers as part of the new edition of our low voltage AC motor market report. During our research, we’ve heard multiple reports of vendors having difficulty fulfilling their supply of electric steel due to steel suppliers favoring automotive customers who are placing larger orders. We first began hearing instances of this in mid-2021 and the frequency at which this gets mentioned in vendor interviews is rising.

The Scale of the Problem

The number of vehicles utilizing an electric motor in the drivetrain is still relatively small compared with those utilizing a traditional internal combustion engine. However, ambitions from the largest auto manufacturers indicate a rapid shift in this balance over the next decade. The question is then, how significant will demand be from the automotive sector, and what is the timeline surrounding this?

To answer the first part of the question, let’s take three of the largest auto manufacturers in the world: Toyota, Volkswagen, and Honda. Together, they comprise 20–25 percent of the automotive market globally in terms of vehicles shipped. In 2021, 21.2 million cars were produced between these three manufacturers alone. This would imply a production of ~85 million cars in 2021. For simplicity’s sake, let’s assume a 1 to 1 ratio between the number of motors utilizing electric steel and the number of electric vehicles sold. If just 23.5 percent of the ~85 million vehicles produced were to be electric, the number of motors needed to support this production volume would be larger than the 19.2 million low voltage AC induction motors sold into commercial and industrial applications during 2021.

The trend towards electrified vehicles is inevitable but determining the speed of adoption can be a difficult task. It is clear however that announcements by automotive manufacturers like General Motors, which in 2021 pledged to go all electric by 2035, have pushed the electric vehicle market into a new gear. 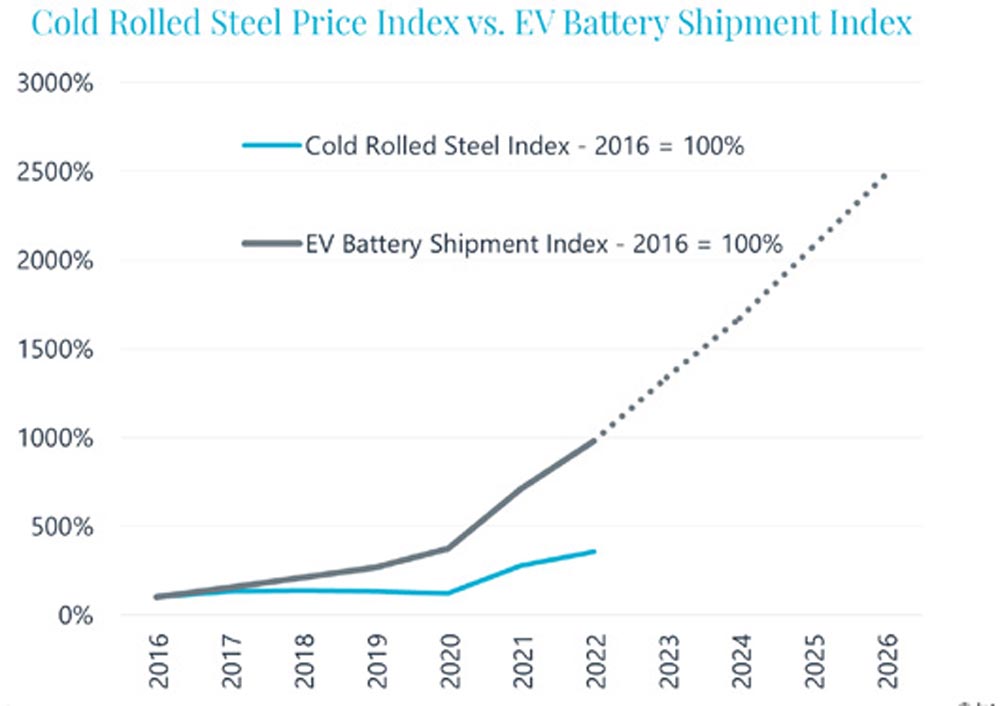 At Interact Analysis, we track the production of lithium-ION batteries used within electric vehicles as part of our ongoing research within the battery market. This series can be used as an indicator for the speed at which electric vehicles are being produced. In the table above, we are showing this series, along with the cold-rolled steel series shown earlier. Showing these together helps demonstrate the relationship between increased EV production and the price of electric steel.

The gray line represents the number of shipments of Li-ION batteries into electric vehicle applications. This is presented as an index value with the 2016 value representing 100 percent. The blue line represents the price of cold-rolled steel presented again as an index value with the price in 2016 representing 100 percent. We are also displaying our forecast for shipments of batteries into EV applications which is represented by the dotted gray bar.

Quickly you will recognize the sharp uptick in battery shipments between 2021 and 2022; hitting nearly 10 times the number of shipments seen in 2016. Alongside this increase you can observe the price of cold-rolled steel ticking up during the same time-period. Our expectations for the rate at which EVs are being produced is demonstrated by the dotted gray line. We expect that over the next five years, the gap between supply and demand for electric steel will widen as increases in production capacity lags the sharp increase in demand for the commodity coming from the electric vehicle sector. This will ultimately result in supply shortages which will manifest into longer lead times and higher prices for motors.

The solution to this problem lies in the hands of steel suppliers. Ultimately, more electric steel needs to be produced to close the gap between supply and demand. We expect this will happen, albeit slowly. While the steel industry works to resolve this, we expect that motor suppliers which are more vertically integrated within their supply chains (particularly their steel supply) will begin winning share based on lower lead times and lower prices while the rest of the market struggles to secure the materials necessary for production.

Motor suppliers have been discussing this as a coming trend for years. It is now safe to say that the trend has officially arrived.

The Electric Steel Dilemma and Its Impact on Motor Vendors