We use cookies to provide you with a better experience. By continuing to browse the site you are agreeing to our use of cookies in accordance with our Privacy Policy.
Home » Hovercraft Technology Taking Us Back to the Future

Hovercraft Technology Taking Us Back to the Future

Hovercraft Technology Taking Us Back to the Future

There are few things in this world that elicit such a gleeful, childlike sense of wonder as does the word “hoverboard”.

I mean, regular skateboarding is already “extreme” enough to merit a spotlight at the radically named X Games — now imagine taking off the wheels and the bearings and swapping them out for the good old fashioned reliability of unexplainable floating magic.

Plus, the hoverboard adheres to one of the infallible laws of the universe: If Marty McFly did it, then it’s probably pretty cool.

Unfortunately, despite mean spirited lies perpetrated by “Back to the Future” director Robert Zemeckis, hoverboards don’t exist. Not in the 1980s and not now. Some companies — most recently Lexus in June — have tried their hand at producing an honestto- goodness levitating transportation device, but every attempt has been as sad and unfulfilling as Sisyphus trying to push that infernal boulder to the top of the hill.

(And let me stop you right now before you ask: Those self-balancing, two-wheel scooters libelously calling themselves hoverboards don’t count. Shame on all of you. Somewhere in Hill Valley Doc Brown is rolling over in his grave).

But I have a silver lining for you: While hoverboards don’t exist, hovercrafts are very, very real and, consequently, very, very awesome.

In fact — and this is a true “Great Scott!” realization — they’ve been in commercial use longer than Michael J. Fox has been alive.

The modern day hovercraft was actually developed way back in the 1950s by a British mechanical engineer named Sir Christopher Cockerell. 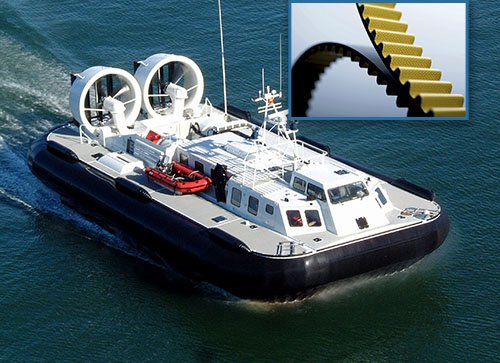 Today, hovercrafts are used throughout the world as specialized transports in disaster relief, coast guard, military and survey applications. Very large versions have been used to transport hundreds of people and vehicles across the English Channel, while others have military applications used to transport tanks, soldiers and large equipment in hostile environments and terrain.

One of the premier hovercraft manufacturers in the world is Griffon Hoverwork, a British company founded in 1976 that produces hovercrafts with marine diesel engines.

Griffon recently designed two new hovercrafts that will be used as part of a ferry service from Portsmouth, England to the Isle of Wight. Both crafts use Synchrochain Carbon timing belts from the ContiTech Power Transmission Group. A 5,502 mm long, 220 mm wide Synchrochain Carbon connects the main shaft with the two-meter high propeller, while a 4,956 mm long, 60 mm wide timing belt of the same type connects the main shaft with the fan, which has a diameter of about half a meter. These are the longest endless polyurethane belts that have ever been made to date, according to a press release from ContiTech.

“We want to install the engines in the craft as low as possible in order to achieve a low center of gravity,” said Selina Kefford, marketing manager and sales support at Griffon Hoverwork. “At the same time, we use the largest possible diameter propeller, because they turn more slowly and are quieter than smaller ones. With a low engine, but a large diameter propeller, it requires a long belt to get from one to the other.”

Perhaps the craziest part in all of this — way stranger than the fact there have been air-cushion vehicles capable of zipping over land, water mud and ice with equal efficiency since before the Internet was a thing — is that the CEO of Griffon Hoverwork is named Biff Tannen.

OK, I made that last part up.
But honestly, it would have made a whole lot of sense if it was true.

Erik Schmidt, Assistant Editor, has a Bachelor's degree in journalism from Marquette University. He has a decorated writing history that includes stops at various journalistic enterprises in the Chicagoland area where he covered sports and hyperlocal news. He joined the staff of both Gear Technology and Power Transmission Engineering in 2014..