We use cookies to provide you with a better experience. By continuing to browse the site you are agreeing to our use of cookies in accordance with our Privacy Policy.
Home » An Overview of Fretting Wear

An Overview of Fretting Wear

An Overview of Fretting Wear

Fretting is considered as a type of wear that occurs in the presence of a small movement between machine components (Refs. 1–2).The small movement could be observed in parts that are not intended to move, and also parts where limited movement is allowed by design. Bolted joints, hollow-bore-shaft mating area, keyways, turbine blade roots, bearing races, shrink fitted and press fitted parts are examples of where unintended movement occurs. And flexible coupling, splines, cams, leaf springs are components that are allowed to have limited internal movement.

Fretting can be elaborated with one of the above examples — hollow-bore and solid-shaft arrangement. Two independent machineries can be connected with this arrangement, in order to transmit power and rotational motion. Fretting is commonly observed at contact surface due to mating parts' unintended relative movements in radial and axial directions. Reasons for those movements could be traced back to the design, manufacturing tolerance and/or installation of the components. The red-color-stained area with some debris (and/or fine red powder) is an evidence of a fretting condition. As a consequence of this condition, the mating surfaces lose their geometric tolerance and create misalignment between components. Often, it becomes impossible to separate the solid shaft from the hollow bore at the time of maintenance, or replacement.

This article dives into the reasons of this failure, its consequences and mitigation methods. The article also discusses about the life prediction of components. First, we will have to understand the fretting failure mechanism. 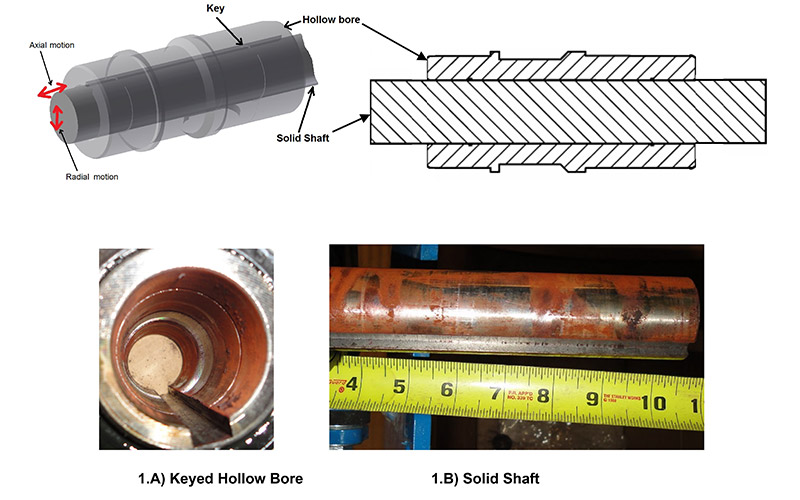 Figure 1: Fretting condition example—staining is an evidence of fretting occurrence

Technically speaking, the fretting wear can occur when a pair of structural elements are in contact under normal load, while cyclic stress and relative movement are forced along the contact surface.

The localized ‘relative movement, which is small and oscillatory, between two ferrous materials is defined as 'slip amplitude’. The slip amplitude is a peak-to-peak amplitude of the relative motion, and it could be as small as 0.25 microns (Ref. 3). In this mechanism, pressure and sliding initialize material adhesion. It is also described as ‘micro-welding’ in the literature. That leads to the material transfer from one surface to the mating one (Fig. 2). Later, the transferred material oxidizes, and its dislodging forms red oxide powder (Fℯ2O3), called hematite (Fig. 3). The powder is formed in presence of oxygen, at room temperature; this powder does not carry magnetic property. Generated particles of the powder are extremely hard, and act as an abrasive. 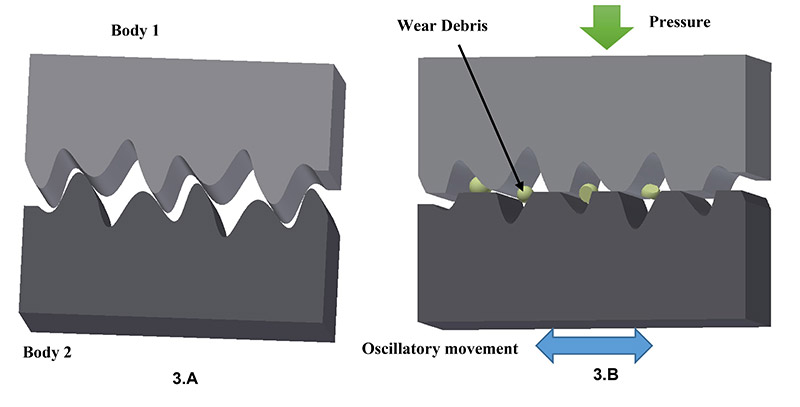 Generation of the powder leads to more clearance between the mating surfaces, and consequentially more intense relative movement. Again, closing the loop, it would increase the rate of powder generation.

There are more than fifty parameters that influence the fretting fatigue process. Type of materials of the mating surfaces, their shapes, surface roughness, hardness, pressure in the contact zone, slip amplitude, frequency are some of them. 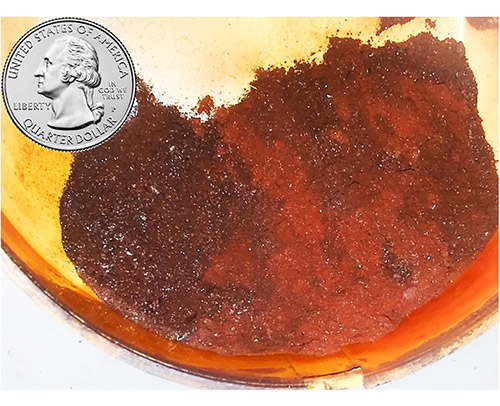 Figure 3: Fine oxide powder as a result of fretting.

Contact pressure and displacement amplitude are generally considered the most important contributors in deciding the extent of fretting (Ref. 4). An increase in the magnitude of one or both of them correspondingly increases the surface damage. It is also proposed that the contact geometry greatly influence the extent of the wear (Ref. 5).

Surface hardness greatly influences the wear fatigue life of components. It has been documented that the contact surfaces with different hardness show less wear volume than the surfaces with the same hardness (Refs. 6–7). When surfaces hardness differs, in general, wear debris from the harder surface is retained on the softer surface, protecting it from wearing out.

Further, explaining another influencing factor- temperature, one study shows that the local hot spots at contact surfaces of AISI 52100 steel drive microstructural changes in materials (Ref. 8). These hot spots could reach above 1000° C temperature, altering mechanical properties of the material.

The oxide wear debris also plays a role in fretting wear. Depending on the ‘adhesion-dominant’ or ‘abrasion-dominant’ fretting mechanism, the wear debris helps to accelerate or reduce the wear damage (Ref. 10). In the referred study, it was experimentally shown that the presence of the debris in bronze-on-steel contact added more wear damage, while in steel-on-steel contact, alleviated it.

Stresses are concentrated at edges of the contact, initiating crack at those locations. The concentration of stress can be calculated using numerical method — finite element analysis (FEA) (Refs. 11–12). Using critical distance theory, stress distribution under fretting condition can be calculated, and hence the fatigue life.

Even though the occurrence and timing of the fretting phenomenon is not quite predictable, once occurred, it is still possible to address it and avoid its further acceleration. Extra attention should be paid to constrain unwanted movements of components. The relative movement of the mating shafts highlighted in Figure 1 can be minimized by clamping shafts axially. Per Author’s experience, the clamping rings added on the both ends of the shaft, as shown in Figure 4, help to align of the shaft help to align the components with each other, and arrest axial as well as radial relative (unwanted) motions.

As mentioned before, fretting cracks are usually observed at high stress concentrations areas like shaft shoulders, steps, component edges etc. The stress concentration could be addressed in the design phase of the assembly or component. For instance, providing undercuts at contact ends of the hollow bore and solid shaft arrangement would help to alleviate the stress (Ref. 3). Applying lubrication between contact surfaces is one way of mitigating fretting. However, the lubricant use should not increase the slip due to reduction in coefficient of friction. If a thin oil is used, it needs to be replenished; it may be less than ideal. Solid lubricant like molybdenum disulphilde or zinc oxide are preferable to be utilized; however, for high fretting cycles, they may not be effective.

Surface treatment is considered to increase surface hardness in order to improve fatigue strength. Other options, viz. Surface coating (chromium coating), use of PTFE material are also available to delay the effect of fretting wear (Refs. 14–15).

Understanding of fretting wear is evolving, as are the solutions to counter it. This article briefly touches different aspects of this wear problem, including its mechanism, different influencing factors, and mitigation techniques. 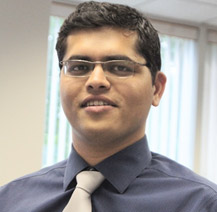 Sandeep V Thube is working as a Sr. Research & Development Engineer at Sumitomo Machinery Corp. of America, Chesapeake, VA. Sumitomo is a leading manufacturer of gear reducers and control products in a wide variety of applications. Sandeep has M.S. degree in Mechanical Engineering, specializing in product design and simulation. In his 12 years of work experience in the gear industry, he has worked on numerous complex problems that the industry faces; one of them is described in this paper. He has previously authored ASME and AGMA conference papers.