We use cookies to provide you with a better experience. By continuing to browse the site you are agreeing to our use of cookies in accordance with our Privacy Policy.
Home » Closed Loop Control of Hybrid Motors: When Is It a Servo?

Closed Loop Control of Hybrid Motors: When Is It a Servo?

Hybrid motors actually started out as high-torque DC brush motors for bicycles back in the 1890s, and later as 2-phase split-phase motors running from 60 Hz to run 78 rpm record players before eventually ending up as the 1.8-degree steppers—first full step and later microstep commonly now seen in machine tools. 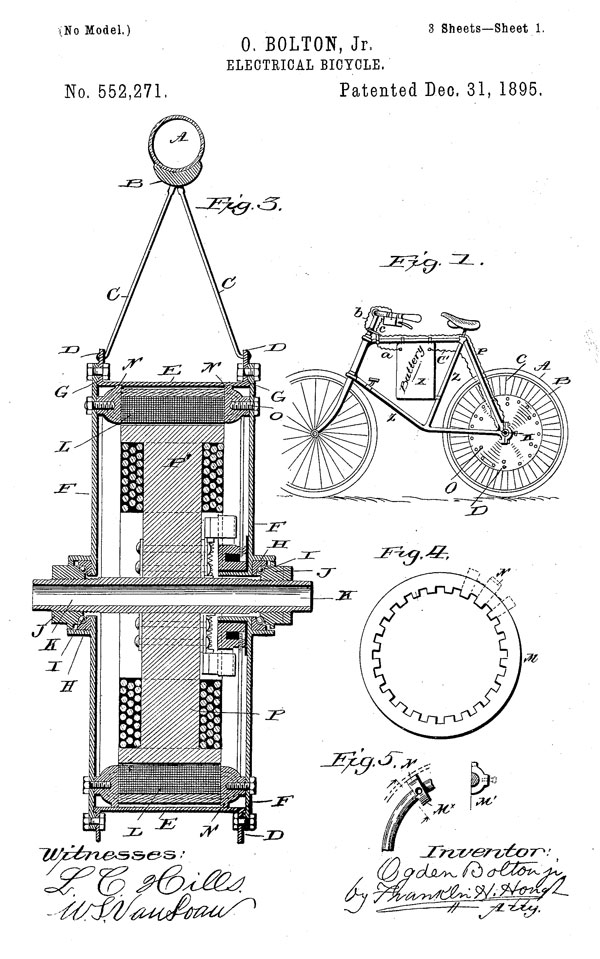 The first electric bicycles used  a transverse flux motor, among the earliest forms of hybrid motors (U.S. Patent No. 552,271, from 1895).

The vast majority of hybrid motors are used as open-loop step motors. The simplest and lowest cost and also lowest performance versions are the 6-wire motors driven from a power source to the center tap of each winding with four transistors to drive each winding half to the ground. Adding a series resistor to the center tap increases the ability to make the current change more quickly and allows the motor to operate from a higher voltage, improving the power at higher speeds, but the constant current through the resistor also generates significant heat. Also, the typical six-wire configurations are using only 50% of the copper at any one time. Bipolar motors—typically four-wire configurations—use all the copper in the motor, which reduces the resistance of the motor with the same windings by 50%, allowing 1.41 times the current rating for the same number of turns and gauge of wire. The higher current increases the available torque of the motor with bipolar windings. The Bipolar motors use more transistors, but the additional transistors also improve the ability to both drive current into the winding and to pull current back out of the winding in a controlled manner, useful when decelerating the motor. 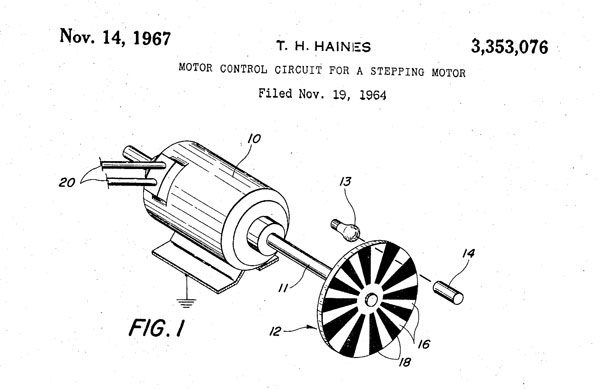 As stated earlier, the original application for hybrid (transverse flux) motors used brushes to commutate the motor to keep the torque angle of the motor at an optimal angle. The first closed-loop step motor designs emulated this operation while going brushless by adding encoders with 200 counts per revolution, corresponding to 200 full steps in a common 1.8-degree step motor. The “closed-loop stepper” uses a step generation circuit that limits the step rate to prevent the step drive angle from getting more than 1 or 1.5 full steps (according to the patent) ahead of or behind the measured rotor position. This operation prevents the motor from losing synchronization and improves available torque when accelerating or decelerating.

However, for portions of the move that are not maxing out the motor, the motor operates as a standard open-loop step motor. Although these motors do not require tuning, do not dither, and do not lose steps, they still have strong vibrations at resonance frequencies with the attendant torque reductions typical of open-loop step motor operation. The accuracy at a stop is dependent upon the holding current versus the load on the motor when stopped, and with friction, an error will remain. Trying to reduce the error requires keeping the current higher, which leads to motor heating. As the motor spends most of its time in open-loop mode, the efficiency of the motor is basically the same as for open-loop steppers—which is fairly low.

An improved version of the closed-loop step motor design increases the encoder resolution and microsteps the hybrid motors to reduce vibration. This helps but does not eliminate resonance issues, which arise from the rotary inertia of the rotor interacting with the magnetic “spring” of the rotor interacting with the stator. It is also common for the closed-loop step motors to use current control loops more optimized for the first and third quadrants—that is for driving power into inertia and do not have as fine of control for the second and fourth quadrants where the motor is acting as a generator. Although higher resolutions are available with the use of microstepping drives, the heating and accuracy problems still remain for these higher resolution versions. Another common issue with microstepping drivers is that they require changing the stepping resolution at different speeds as the processors may not be able to keep up with the full micro-stepping rates at higher speeds.

Commonly, the various closed-loop stepper configurations are open loop whenever the error angle is less than a full step. They do not have the ability to dampen the final ringing of the motor. This ringing can both delay settling and can double the final settling uncertainty as the friction can lock the final position on either the positive or negative half of the ringing waveform. Ringing is also not just an issue when stopping but is also a significant issue when rotating and can persist for tens of seconds or more while rotating, causing the speed of the motor to continue to vary even though the step rate is constant.

A variant of the closed-loop stepper motor uses “stall prevention.” This method uses a variant of a Kalman filter to estimate the motor phase using a measurement of the motor winding voltages and currents. The Kalman filter needs a minimum motor speed—typically around a hundred rpm—to generate enough back-EMF to get a good rotor angle estimate. For lower speeds, these again operate as an open loop. Some of these designs are also able to vary the motor current as a function of load to improve motor efficiency—reducing the heating of the motor.

The hybrid motor may also be operated as a true servo motor. The hybrid motor is a two-phase AC synchronous motor. With the addition of a position feedback element, the difference between the measured position and the actual position may be determined, with the error being used to calculate and adjust the needed torque for the motor, to reduce the error of the system. The phasing of the current to the motor is optimized by the controller to minimize motor heating for a given torque requirement and motor speed. Further, the winding currents can be adjusted to produce for field weakening of the motor, which can typically double or triple the available motor speed available for a given power supply voltage, which flattens the efficiency curves for the motors—and 4,000 rpm operation becomes possible.

The open-loop stepper has a second-order system from the rotor inertia interacting with the effective rotary spring of the rotor magnet interacting with the stator magnetic field, which gives rise to low-speed resonance issues. The hybrid servo system commutates the stator field to keep the rotor-stator angle nearly constant, which essentially eliminates torque variation with angle. Without the spring, the rotary pendulum does not exist, and the low-speed resonance is eliminated. The motor can be used over the full range of speeds without torque dropouts normally seen with step motors.

The servo system tuning adds damping to the system. This damping allows for very rapid motions with very rapid settling and minimal overshoot. As only the current actually needed to produce torque is applied to the motor, motor heating is minimized, and efficiency is significantly improved. With full four-quadrant control of the current through the windings, tight control is maintained both when accelerating and decelerating the load. Integral control reduces the error, even in the presence of an offset force or friction.

Servo control of these motors produces a controlled-to-limit torque, which can be useful in applications such as tightening caps. Servo systems also allow the designer to add a secondary feedback device to allow the load position to be directly measured. Such a dual-loop system helps compensate for backlash and other distortions in the drive path, including leadscrew inaccuracies and pulley eccentricities.

A servo system may be made very rigid when stopped, while the current to the motor may be minimized to that actually necessary to counteract the load encountered. The positioning error can thus be significantly less than when these same motors are operated as step motors, while simultaneously reducing the motor heating. Operating these high torque density hybrid motors as servos also reduces the required torque margins, effectively allowing 2x to 3x more power out of the same-sized motors. Damping allows significant load inertia mismatch levels while still having stable and smooth operation. 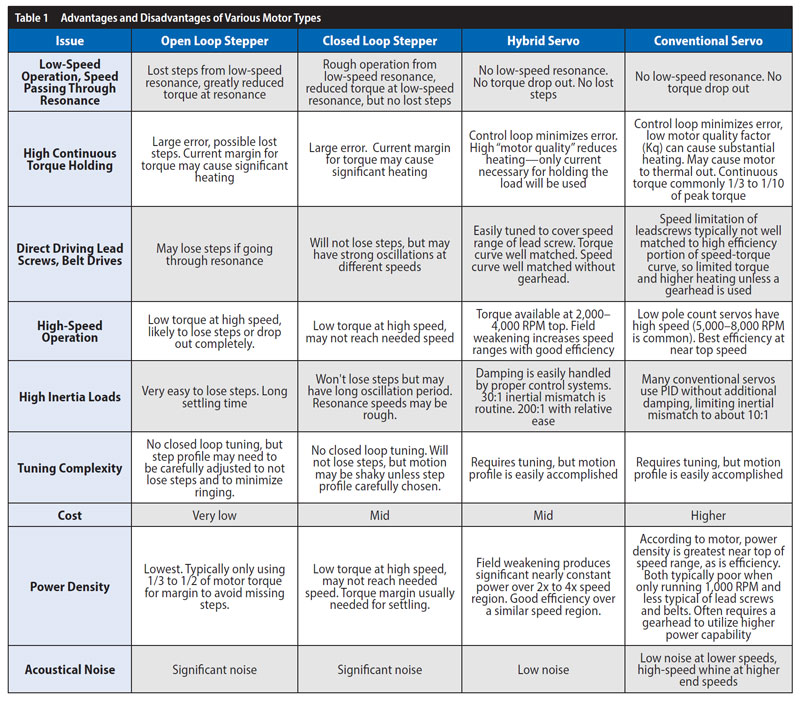 The pole count of a motor times the number of turns in the winding times the flux density in the gap sets the torque constant for a motor. Traditional servo motors have low pole counts—typically one to 16 pole pairs, as each pole normally requires its own magnets, and the related stator slots are normally individually wound. Due to the lower pole count, traditional servo motors typically have a lower back-EMF and the resulting lower torque constant. Traditional servo motors typically also have significant end windings, which raises the winding resistance without adding to the motor torque. While the low back-EMF allows these motors to run at high speeds, the low torque constant also limits the continuous torque of the motor due to I2*R heating of the stator coils. Efficiency generally peaks near the upper speed limits of the motor, resulting in low efficiency at low speeds. 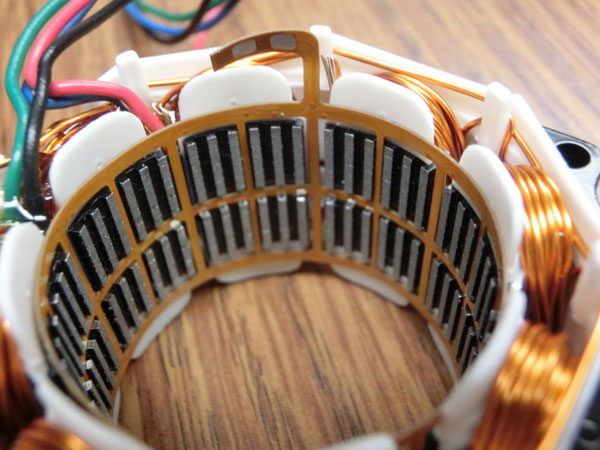 The Mosolver from Quicksilver Controls is an exampole of a full hybrid servo motor.

Hybrid servo motors have a much higher pole count—typically 50 (1.8 degree) or 100 pairs (0.9 degree). The design of the hybrid servo allows rotor magnets to be shared with many poles, enabling the high pole count while still having a simple design. The stator windings have a small end winding factor, so most of the copper is torque producing. The resulting structure results in a remarkably high motor quality factor (torque per square-root of power), allowing for high continuous torque. The trade-off is a lower top speed capability. This low speed limitation is often offset by not needing gearheads or in other cases as many stages of speed reduction for a given application.

Original use of the word servo (from Latin for slave or keeper) was related to water clocks (aka clepsydras) of ancient times, which kept the flow of water constant by keeping the height of the water nearly constant. These mechanisms sensed the water height in a reservoir and allowed more water in when it started to drop below a threshold. Think of the floats in a modern toilet. So, to answer the original question: To be properly be called a “servo,” the mechanism must vary its operation in response to a measurement so as to reduce the variation in the measured parameter. Thus “closed loop” does not always equate to “servo”!

You can read more about ancient water clocks at https://aljazaribook.com/en/2018/09/04/castle-clock_en/