We use cookies to provide you with a better experience. By continuing to browse the site you are agreeing to our use of cookies in accordance with our Privacy Policy.
Home » Motorsports in Motion

Before last December, few companies outside the NASCAR community had heard of Accelerating Developments International (ADI). The North Carolina-based provider of technology, engineering and product innovations for the automotive and motorsports industries quietly went about its business until a gala dinner in Cologne, Germany put its engineering team in the proverbial driver’s seat.

According to Jay Drake, general manager and head of research and development at ADI, race teams like IRL, F1, Champ Car and Daytona Prototype wanted to work with the company after they were honored with the 2007 “Best Testing Technology of the Year” award at the Professional Motorsports World Expo in Germany.

“The award brought ADI a great deal of recognition from teams that weren’t aware of us before,” says Drake. “It was an honor for ADI to be recognized by a panel of its peers.”

The award in question came from the creation of the KD-Rig, an advanced diagnostic testing system that provides motorsports teams with detailed simulation data about the chassis and suspension of a race car. 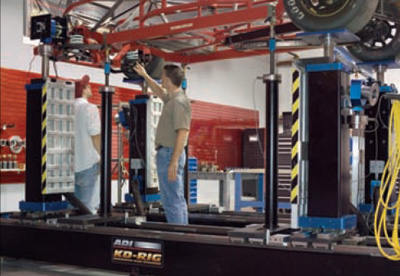 The rig raises the car off the ground to identify and resolve any issues.

“The KD-Rig is very different in function and testing approach,” says Drake. “The wheels are mechanically coupled to the road actuators, and these road actuator towers float in the x and y directions. This allows us to track the suspension movements in x, y and z.”

“As a drive and control technology supplier, we’ve had a long-standing relationship with them,” says Dave Giffels, business planning manager at Bosch Rexroth Corporation. “Originally, we provided the hydraulics equipment and then the servo technology and linear motion components used to simulate the movement of the suspension system.

“The test rig turned out to be an exceptional device. Not only are we proud that Rexroth technology helped ADI win an award for their rig, but it’s also neat knowing that our components play such a big role in helping those race teams make their cars go faster.” 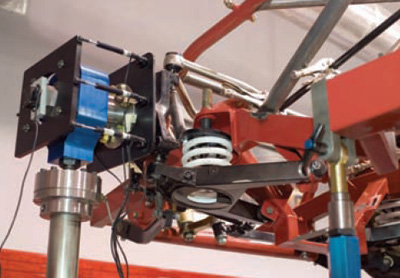 A critical component called "coil bind" is being tested by engineers.

Teams have also been using the rig for coil bind setups in the suspension. “Coil bind” occurs when the spring coil is fully tightened and becomes rigid. The KD-Rig identifies how loose the coils should be at the start of a race and the necessary adjustments needed throughout it.

“Considering the new direction set-up is taking and limited track time, there’s no question that ADI with its KD-Rig can sort through the set-up and even eliminate many of the variables encountered during track testing. ADI and their KD-Rig can definitely speed the learning curve with its car well before you leave the shop and head for the track,” says Larry McReynolds, Fox Sports analyst and former NASCAR crew chief, in a press release.

ADI overcame many challenges during the execution of the KD-Rig project. The team had to rethink how to best implement force control when they decided to switch from hydraulic to electro-mechanical actuation. Drake says the engineers had to design the complete rig in 3D and run virtual simulations to debug any issues in advance. They assembled all the components of the rig in their final prototype. Luckily, everything worked according to plan.

“We’ve made some improvements since then,” says Drake, “but it was a successful startup right from the original design.”

And who can argue with the results? Several industry insiders were delighted by the innovations of the KD-Rig at the Expo.

“The best race car technologies are innovative and provide measurable benefits to on-track performance,” says Graham Heeps, editor of Professional Motorsport World in a press release. “I for one felt the KD-Rig ticked those boxes, and when the other judges’ scores came in, KD-Rig emerged as a clear winner in the Testing Technology of the Year category.”

Drake says the KD-Rig signifies a whole new method of testing that applies dynamic vehicle conditions while extracting all of the vehicle’s kinematics/geometrical changes. The entire process required endless hours in programming for preprocessing, motion control and post processing.

ADI is developing additions that will allow all the car details and physics to become plug-in data that will generate a theoretical track map.

“Currently, we do the reverse, where we’re using measured track data from a vehicle and processing it into a generic track map,” says Drake. “In the near future, we will no longer be dependent on any measured track vehicle data.”