For Paul Revere it was one if by land, two if by sea. But for the team at Roseburg Forest Products, they primarily focus their sights on land, taking wood chips from truck or train before loading them onto sea-going vessels at their Coos Bay Shipping Terminal. The facility, located at the port of Coos Bay in Oregon, uses pneumatic conveyers to intake chips around the clock and load vessels upwards of 19 hours a day during peak season. To produce around the clock, Roseburg Forest Products relies on a handful of brakes that power their mission critical systems. These brakes not only keep operations running smoothly but they enable the Coos Bay Shipping Terminal to be one of the most efficient bulk cargo handling terminals in North America. Gregg Harvey, Maintenance Coordinator, and Richard Dybevik, Coos Bay Terminal Manager, would be the first to tell you that their brakes are the machinery that’s speeding up their business success.

A day in the life of a wood chip

Whether it’s from customers or Roseburg-owned sawmills and private facilities, wood chips are brought in via trucks and rail cars 24/7. No matter their route to Coos Bay, the chips are weighed on arrival and their now-empty containers are weighed again on their way out to ascertain how much material has entered the facility. Next, the chips that were trucked in are dumped into a larger pit which they are eventually taken out of with box chains into a conveyance. For rail car wood chips, which have three times the volume of trucked containers, they are dumped into a separate pit before two sets of dry chains feed them into the same conveyance as the trucked materials.

Once the wood chips are in the conveyance system, they pass through a 52-inch airlock feeder and into a pneumatic system where six 700 horsepower blowers are used in pairs of two to stock wood chips by species to storage. Then, after the chips are placed in storage, they await their lucky day to be loaded onto a vessel. 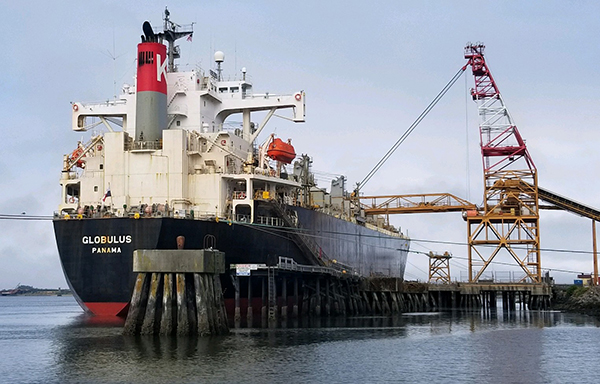 The process then reverses itself when vessels dock at the Coos Bay Shipping Terminal. Stored chips travel via conveyance up to a 210-foot tower with a 72-inch airlock feeder and a loading boom that swings out over the vessel. The loading boom has a loading head with a telescopic pneumatic pipe that can extend, retract, and rotate a full 360 degrees to allow the longshoremen to distribute chips evenly in the vessel holds. This loading head uses a Force Control MagnaShear MSB6 motor brake coupled to a 15 HP motor to start and stop the position of the loading head to optimize the vessel loading process.

Because of their success with the loading head operation, when the time came to upgrade old and failing PE brake shoes elsewhere in their process, Harvey and Dybevik decided to call up Force Control once again. The main reason? Reliability. “Now we have good reliability with our brakes, which is key,” Harvey explained. After the loading head brake, Roseburg installed MagnaShear motor brakes into their railcar unloader and load out telescope operations.

A chip off the old block

Roseburg’s railcar unloader uses Force Control’s MagnaShear MSB9 500 lb. 1,800 rpm motor brake as a holding brake on a 50-horsepower motor. The motor allows an operator to start to rotate the railcar until it reaches its desired angle before engaging the brake to lock the pistons down and secure the railcar at its current spot. This brake usually sees four to eight cycles before a vessel is totally emptied. Up to 15% of the wood chips that come into the Coos Bay Shipping Terminal come by rail so the brake’s role in unloading 10 railcars a week is critical to the overall operation of the plant.

The facility also uses a MagnaShear MSB6 brake on a 60-horsepower motor for their telescope boom. The telescopic pneumatic pipe can extend or retract their loading head onto vessels to distribute wood chips, a process that typically takes 31 to 33 hours to load a 3.6 million cubic foot vessel. Both brakes are activated frequently to evenly distribute the wood chips throughout the six cargo holds in a vessel. The telescopic brake engages 750 to 1,000 cycles per hold and the rotating loading head is activated 2,000 to 2,500 cycles per hold. 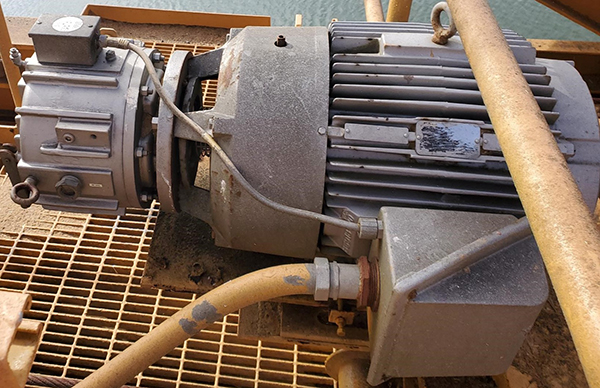 “If we had a failure on either one of those, if we were out a spare, it would keep us from vessel loading,” Harvey said. “Primarily, that’s what we’re here for…that’s our end goal.”

Before switching to MagnaShear brakes, the holding and telescope brakes used PE brakes which started to have mechanical issues after they got past their life expectancy. “The brake started to have some failures and being so obsolete, trying to get parts for it was difficult,” said Harvey. Ten years later and Harvey is singing a different tune. The rollover and telescope MagnaShear brakes are still in use and haven’t experienced any mechanical issues, even though the brakes have been in use outdoors in the dust and debris of wood chips, and subject to sea air for over a decade. And while the loading brake doesn’t have as clean of a maintenance record as its peers, the Roseburg and Force Control teams have collaborated to adjust their program accordingly.

“On the loading head, it seemed like for a little while there we were going through brakes, burning them up, and having problems with those,” Harvey explained. Since a motor insultation issue came to light, Force Control and Coos Bays’ electricians created and implemented a preventative maintenance program of changing fluid every four to six vessel loads, which extended the brake life to nine to ten months. To Dybevik this was just another example of the power of a good industry partner. “Force Control has been awesome to work with as far as research, development, and figuring out what our preventative maintenance program should be,” he said. 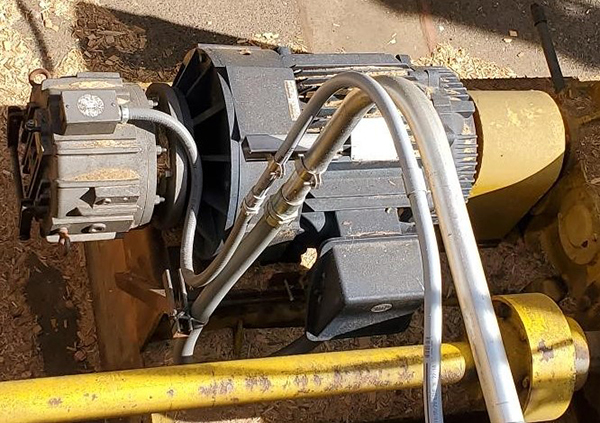 Unlike dry brakes, MagnaShear oil brakes use oil shear technology, which includes a film of transmission fluid between the brake disc and the drive plate. As the fluid is compressed, the fluid molecules are put in shear– thus imparting torque to the other side. This torque transmission causes the rotating surface to come to a stop. Since most of the work is done by the fluid particles in shear, wear is virtually eliminated. Elimination of wear enables oil shear brakes to last significantly longer, while also eliminating the need for maintenance and adjustments which are common for dry braking systems.

In addition to transmitting torque, a patented fluid recirculation system helps to dissipate heat which causes friction disc wear and eventual failure in traditional dry brakes. Along with heat removal and torque transmission, the fluid serves to continually lubricate all components of the oil shear brake, increasing their service life.

Force Control MagnaShear motor brakes have a “quick mount” feature that allows them to easily be mounted to drive motors in NEMA frame sizes from 56 to 449 or some IEC frame motors. These brakes are shipped ready to install, with no assembly or adjustments required. These proven motor brakes are totally enclosed from outside contaminants, with seal integrity for harsh and washdown environments. A modular design /assembly allows for ease of servicing and maintenance.

While “applying the brakes” generally means slowing down, for Harvey, Dybevik, and the entire team at the Coos Bay Shipping Terminal, applying the right brakes transformed an equipment fix into a decade of reliable service and support. New brakes meant there was no stopping the flow of wood chips for Roseburg Forest Products.