Motion Industries, Inc. is saddened to announce the sudden passing of its president and CEO, Tim Breen.

“Motion Industries has lost a great leader and the world has lost an amazing human being,” said Motion Industries Leadership. “Those of us who have been fortunate enough to know and work with Tim have lost a dear friend and an inspiration. Tim leaves behind a great company, a great culture and a great team that he affectionately referred to as ‘The Motion Family.’ His spirit will forever live on at Motion.”

Breen began his career with Berry Bearing Company in 1982 and served there as a sales representative, branch manager, regional manager, and corporate accounts manager. His responsibilities continued to grow after Berry Bearing and Motion Industries joined forces in 1993.

Breen was a past president of the Bearing Specialist Association (BSA), involved in the Power Transmission Distributors Association (PTDA) and was on the board of Junior Achievement of Greater Birmingham. He was an avid golfer, camper and enjoyed boating and watching sports, especially Notre Dame and the Chicago Cubs.

Motion Industries Leadership added, “We will honor his memory by dedicating ourselves to continuing the work he loved, growing the company he led and appreciating the team he loved so much. Tim’s guidance and vision have left us in a strong position to continue building the Company’s success.” (www.motionindustries.com)

Winners of the 2018 Powder Metallurgy Design Excellence Awards Competition, sponsored by the Metal Powder Industries Federation (an international trade association for the metal powder producing and consuming industries), were announced at the PowderMet2018 International Conference on Powder Metallurgy & Particulate Materials. Receiving grand prizes and awards of distinction, the winning parts are outstanding examples of PM’s flexibility to push forward new concepts and process controls and demonstrate the inexhaustible well of capabilities PM can marshal in the service of component design. Designers continue to choose PM for critical applications such as auto engines and transmissions, medical devices, consumer products, military applications, and more.
The Grand Prize in the Automotive—Transmission Category was awarded to GKN Powder Metallurgy for an aluminum planetary reaction carrier made for General Motors. The carrier goes into the all-new GM 9T50 9-speed transmission offered in such vehicles as the Chevrolet Malibu and the Equinox crossover. Compacted of a unique metal-matrix-composite (MMC) aluminum alloy system and mated to an overdrive carrier, this first-of-its-kind two-piece design required industry-first tolerances.

GKN Powder Metallurgy won a second Grand Prize in the Automotive—Engine Category for a copper steel main bearing cap made for FCA US LLC. The part is used in the 2.0 L all-aluminum turbocharged four-cylinder FCA engine launched in the Alfa Romeo Giulia. While powder metal (PM) main bearing caps have dominated engine design for more than two decades, the design of this part breaks new ground. Requirements for engine weight reduction drove the designers to an “upside down” sculpted version. The novel design delivers a part that is 23% lighter than previous versions and offers a 10% better fatigue strength.
In addition, an Award of Distinction in the Automotive—Transmission Category was given to Stackpole International, Canada, for a copper-steel rear planetary carrier made for Ford Motor Company. It’s used in the new 10-speed automotive transmission developed by Ford jointly with General Motors that was launched in such vehicles as the Ford Mustang and GM Camaro. The assembly consists of a clutch hub and a spider, which are joined using a novel sinter-brazing concept. The creative design of the ferrous carrier enabled it to win out over an aluminum casting design by delivering lighter weight and superior strength. (www.mpif.org)

Dana Incorporated has announced that it has signed a definitive agreement to purchase the Drive Systems segment of the Oerlikon Group, a global manufacturer of high-precision gears; planetary hub drives for tracked vehicles; and products, controls, and software that support vehicle electrification across the mobility industry.

Under the terms of the agreement, Dana will acquire Oerlikon’s Drive Systems business for CHF 600 million (approximately $600 million). Committed financing has been arranged to complete the transaction, which will be immediately accretive to earnings upon closing. Subject to customary regulatory approvals, the acquisition is expected to close in late 2018 or the first quarter of 2019.

Consistent with Dana’s enterprise strategy, the acquisition of Oerlikon Drive Systems provides numerous opportunities to drive profitable growth. Among them, the transaction:

Complements and extends Dana’s current technology portfolio, especially with respect to high-precision helical gears for the light- and commercial-vehicle markets and planetary hub drives for tracked vehicles in the off-highway market;

Optimizes Dana’s global manufacturing presence to be closer to customers in key growth markets such as China and India, as well as the United States; and

“Oerlikon Drive Systems is a well-respected technology company that has provided exceptional product innovation and customer satisfaction for nearly a century,” said Jim Kamsickas, president and chief executive officer of Dana. “A great fit culturally, this investment will deliver significant long-term value by accelerating our commitment to vehicle electrification and strengthening the technology portfolio for each of our end markets while further expanding and balancing the manufacturing presence of our off-highway business in key geographical markets.” (www.dana.com)

The Timken Company has reached an agreement with pan-European firm Chequers Capital and IGI Private Equity to acquire Rollon Group. A leader in engineered linear motion products, Rollon specializes in the design and manufacture of linear guides, telescopic rails and linear actuators used in a wide range of industries such as passenger rail, aerospace, packaging and logistics, medical and automation. Rollon sales are expected to be about $140 million for the full year 2018.

“The acquisition of Rollon will further expand the Timken portfolio of leading industrial brands, allowing us to serve existing and new customers in attractive, high-growth end markets around the world,” said Richard G. Kyle, Timken president and chief executive officer. “Like Timken, Rollon is an expert in motion technology and is recognized for developing customized linear motion products for their customers’ application challenges. With its proven operating model and value proposition, Rollon will open up exciting new growth opportunities for the company.”

Additionally, Timken recently announced that it has reached an agreement to acquire Cone Drive, a leader in precision drives used in diverse markets including solar, automation, aerial platforms, and food and beverage. Cone Drive sales are expected to be slightly above $100 million for the full year 2018.
“We are executing our strategy to profitably grow Timken’s power transmission offering across diverse markets around the world,” said Kyle. “The acquisition of Cone Drive will deepen Timken’s position in attractive, high-growth end markets such as solar and increase our power transmission presence in China. Cone Drive is highly complementary to our business, and we plan to generate significant sales and cost synergies with this transaction.”

Cone Drive is headquartered in Traverse City, Mich., and has manufacturing operations in the United States and China. The company has a global customer base and employs approximately 500 people. The business produces a broad range of highly customizable precision drive products that include Cone Drive and H-Fang branded high-torque worm gears, harmonic solutions and precision slew drives. (www.timken.com)

Opened in 1898, the Norwood facility, just outside of Cincinnati, has undergone a century of change, as the process to manufacture motors and the technology behind them has improved. Norwood has stood the test of time through three industrial revolutions, and is one of the longest continuously operating Siemens’ plants globally. With Industry 4.0 upon us, the mechanical motor of old is now a connected device, a valuable plant floor asset capable of providing vast amounts of data with preventative and predictive analytics to ensure more productivity, efficiency and uptime. 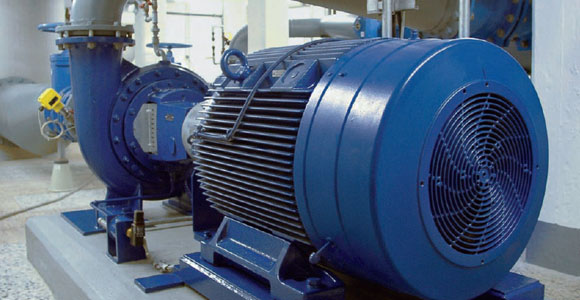 With the largest motor test base in North America, Siemens can combine its century of industry leadership in motor manufacturing with an enhanced customer experience. The new equipment extends Norwood’s testing range from 10,000 to 20,000 hp at frequencies from 10 to 300 Hz, thus addressing the market’s increased use of variable frequency drives. The new test observatory, akin to an executive suite, allows customers to participate by observing testing through bay windows, direct cameras and mirroring computers, which display real time critical data being gathered by sensors attached to their motor.

The project, which began in 2016, required the removal of 550 tons of soil and concrete from the site, excavating a 13-foot deep hole, driving 114 pilings for stability and building a huge concrete vault to securely support a fully loaded test stand. The test stand weighs 360 tons and rests on a self-leveling air spring system designed to support 500 tons when loaded with motors and drives.

“At Norwood, we test every motor that we produce or repair — some 30 to 50 tests per week — and these new facilities give us the ability to conduct as many as five motor tests at a time.” said Tim Bleidorn, manager, manufacturing excellence. “We expect the customer witness tests to average two to three per week and as many as 120 per year.”

In addition to the new test base and observatory, the multi-million dollar investment in Norwood also includes WFL high-precision shaft making equipment and a high-speed balancer, key for two-pole applications at higher speeds and the ability to balance a rotor at up to 12,000 rpm.

“It’s exciting and I’m proud that Siemens is investing in the North American market. We have the No. 1 market share in AboveNEMA motors right now and these new capabilities send a strong signal to our customers and competitors that we intend to maintain that position,” says Ryan Maynus, AboveNEMA product manager.

With more than 100 patents, the 350,000 square-foot facility is a cornerstone to Siemens AboveNEMA motors. The ISO-9001 certified plant has produced more than 150,000 high voltage motors since 1898. The Norwood plant produces horizontal AC induction motors up to 20,000 horsepower and voltage ranges from 460 to 13,200 volts. The plant also manufactures a complete line of large AC vertical motors up to 8,000 horsepower. (www.usa.siemens.com/abovenema)

Funds advised by Triton have signed an agreement of its intention to acquire the business unit SKF Motion Technologies from SKF Group, listed on Nasdaq Stockholm. Triton intends to form a standalone company under a new brand.

Regulatory approvals, finalization of necessary consultations and other customary closing conditions are underway. SKF’s French linear and actuation technology business is dealt with on a separate process, but both parties have the intention to reach an agreement to also divest it to Triton.

“We look forward to actively supporting the management and employees as a stable owner by investing in and supporting the growth and development of the company. Our strong industry expertise, gained through other investments and strengthened by senior industry experts, will contribute in taking the company to the next level,” said Peder Prahl, director of the general partner for the Triton funds.

“By becoming a standalone entity supported by an experienced and active owner with broad sector expertise, we will improve our ability to advance our positions and offerings in niche markets segments, said Daniel Westberg, managing director of SKF Motion Technologies.

“SKF Motion Technologies operate in a structurally growing market driven by automation with an attractive product portfolio and strong engineering competence. We look forward to apply our experience from other corporate carve out processes to build and grow the company further,” said Johan Pernvi, investment advisory professional and advisor to the Triton Funds. (www.triton-partners.com)