We use cookies to provide you with a better experience. By continuing to browse the site you are agreeing to our use of cookies in accordance with our Privacy Policy.
Home » Electric Future/Industrial Past
Power Play

The history of the automotive industry began in “Vehicle City” thanks to the production of wagons and horse-drawn carriages in Flint, Mich. Companies like the Durant-Dort Carriage Company and Flint Wagon Works set the groundwork for the formation of General Motors in 1908. By the early 1980s, Flint was commonly referred to as “Buick City” and represented General Motors early attempts with the ‘Just-in-Time’ manufacturing concept. This slice of Americana will be on display at the renovated Sloan Museum of Discovery, reopening in July 2022, in Flint.

“The story of Buick and our automotive industry is a story of innovation,” says Todd Slisher, CEO/Executive Director at the Sloan Museum of Discovery. “So many new technologies were invented and perfected in Flint to advance the automobile. This spirit of innovation is still important today, driving our future advancements in electric cars, autonomous vehicles and many more changes.” 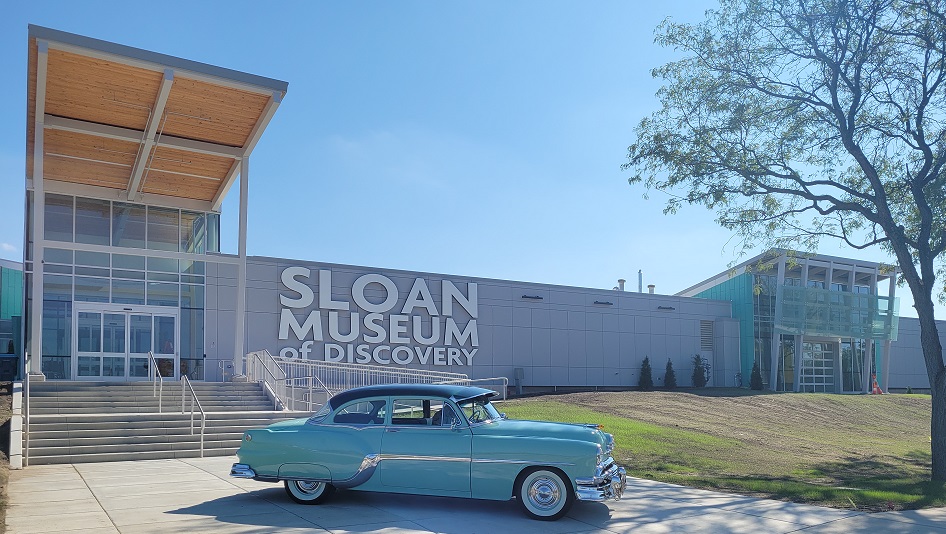 In addition, the story of the automobile is also tied to the history of organized labor. The Flint Sit Down Strike led to the first union contract between an automotive manufacturer (GM) and the UAW. This movement built the American middle class. This history is important to understand, as it can help inform museum visitors as to the future of manufacturing in Michigan and the United States. Slisher says that you can’t tell the history of Flint without a large part of it being about the automotive industry. As home to Buick, Chevrolet, and eventually General Motors, Flint’s main story IS the automobile industry and those businesses and people that were tied to it.

The automotive history of Flint will be a large part of the new History Gallery at Sloan. In addition, a new Vehicle City Gallery will focus exclusively on the history and advancement of the automobile as showcased through the Sloan Museum vehicle collection as well as loaned vehicles, including a rotating GM concept car to talk about the future of the automobile.

In 2018, Sloan Museum started a major project of renovation and expansion. They launched a $30 million fundraising campaign and broke ground for the massive renovation in June of 2019. The renovation and expansion of the new Sloan will nearly double the size of the main museum building from 58,000 square feet to 107,000 square feet. The new Sloan, named the Sloan Museum of Discovery, will feature early childhood learning, hands-on science exhibits, Flint and Genesee history, and a new vehicle gallery.

“We created focus groups to ask the community how they wanted the new Sloan Museum to evolve. One of the main themes we heard was that they wanted a more interactive, engaging museum. Therefore, although we still feature many artifacts, we also have interactive hands-on exhibits in every gallery,” Slisher said.

STEM education is infused throughout the new museum. An entire 11,000 square foot gallery, Discovery Hall, will feature science and hands-on STEM exhibits. “We also have a new Maker’s Lab, a space for making, tinkering, and creating items that solve challenges and will serve as our engineering hub. In addition, programs in our three new Learning Labs will focus on STEM and social studies topics,” he added.

Gearheads, history buffs and auto aficionados will be right at home when the museum reopens this summer.