We use cookies to provide you with a better experience. By continuing to browse the site you are agreeing to our use of cookies in accordance with our Privacy Policy.
Home » Putting the Brakes on Supply Chain Issues and More

Putting the Brakes on Supply Chain Issues and More

The complexity of supply chain issues in a globally interdependent economy is vast, and there are multiple aspects to be addressed in each problem. Food supply has been in the spotlight throughout the pandemic and considering inflation and other factors, the issues aren’t likely to disappear overnight. However, companies like Warner Electric, Force Control, and Miki Pulley are literally putting the brakes on some of these issues with solutions for today and tomorrow. Warner Electric and Miki Pulley both offer brake solutions that include various robotic and battery-powered agricultural equipment being developed for the future while Force Control addresses the here and now with a brake solution for a palletizer problem that was disrupting production at National Frozen Foods. 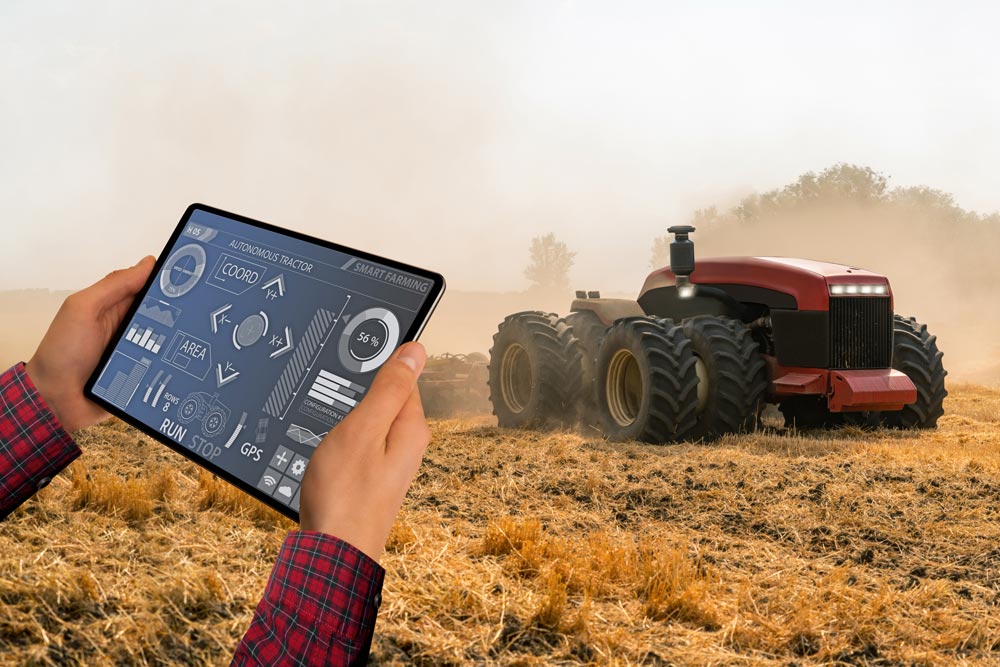 Warner Electric’s braking solutions are designed to reduce power consumption on a wide variety of motions for battery-powered construction and agriculture equipment, including autonomous machines.

Adopted by more than 30 key OEMs since 2010, Warner Electric’s PK brakes are installed on more than 500,000 aerial work platforms and forklift trucks in the field. According to Vaneeckhoute, “The benefits of this cost-competitive range include a one-piece design for easy assembly, lower power consumption, longer battery life, and overall lower maintenance costs.” 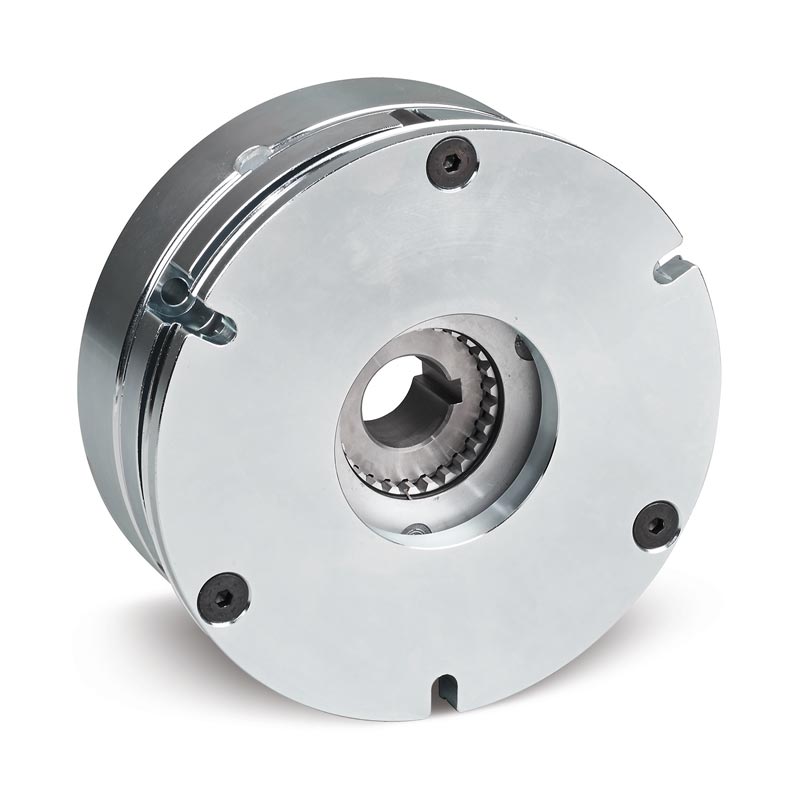 The PK (Very Thin) range is a pre-assembled on/off dry spring-applied electromagnetic brake used for parking and emergency as well as some service braking.

The PK (Very Thin) range is a pre-assembled on/off dry failsafe electromagnetic brake. This failsafe brake is used for parking and emergency as well as some service braking. The vehicle’s AC motor is used in combination with the PK brake for regenerative braking of the vehicle. In addition to the standard friction material, PK brakes can also be fitted with high-torque and high-energy materials depending on the application. The coil can be designed for single- or dual-voltage and pulse-width modulation power supply to reduce power consumption and maintenance.

The CBTB family of electromagnetic axle brakes are specifically for use on battery-powered, dual-drive vehicles with capacities generally up to 8 tons (17,900 lbs.). These advanced high-speed, high-torque brakes provide reliable emergency and parking brake functionality and allow for increased maximum vehicle speed and improved productivity. 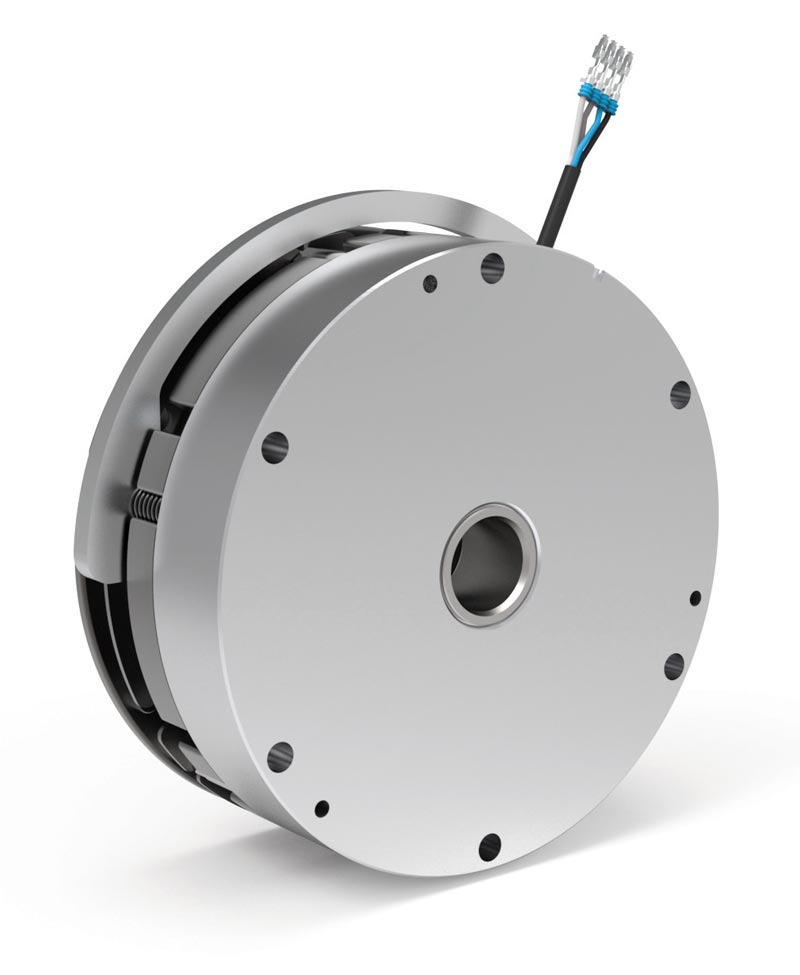 The CBTB family of electromagnetic axle brakes is specifically for use on battery-powered, dual-drive vehicles with capacities generally up to 8 tons.

The integration of proprietary nonstick friction material within the brake design ensures very high energy dissipation and low wear throughout the life of the equipment. The CBTB is designed for vehicles that require the narrowest footprint. It is installed between both wheel motors on the load-bearing axle. When engaged, its double-disc arrangement allows the brake to act on both motors simultaneously.

An optional dual-stage functionality is available to provide better control of the torque by applying 50% or 100% of the brake torque capacity. It also prevents flat surface damage to tires that often occurs when wheels lock up during an abrupt emergency stop.

Production stoppages at National Frozen Foods due to palletizer maintenance and repairs had company leaders concerned. The company packages high-quality frozen vegetables, like corn, green beans, peas, carrots, and more, into retail and foodservice containers. Just before they are shipped out, the packages, in sizes from 16 oz. to 5 lb. for retail customers, or from 10 kg to 55 lb. on the foodservice size, are placed onto pallets using palletizers. Running 18-hours a day for a minimum of 100 cycles per hour, the palletizers are a critical component. A motor and its brake engage each cycle to properly position the products on the pallets. But all shipping activity comes to a screeching halt when one of the motor brakes fail. When the production downtime began to cut into profits, Dan Snider, National Frozen Foods maintenance manager, looked for a solution that would keep production humming without breaking the budget. 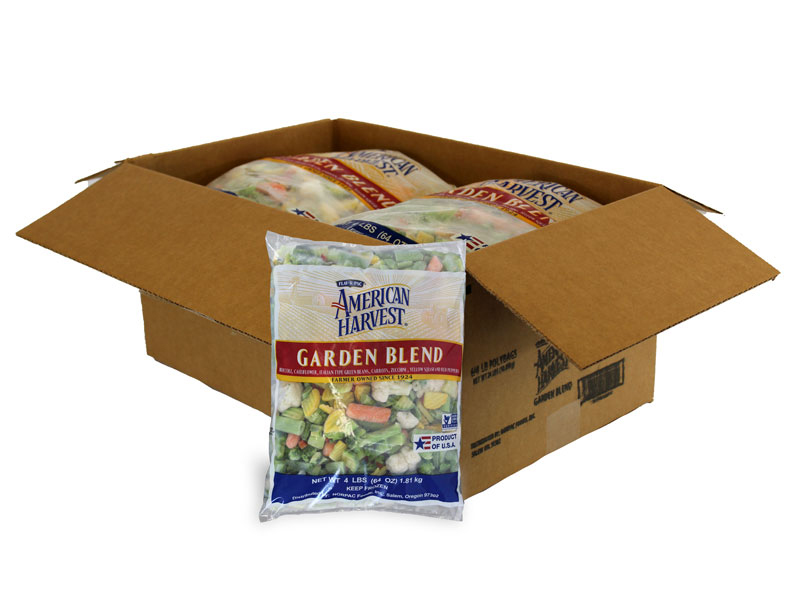 When the production downtime began to cut into profits, National Frozen Foods looked to Force Control for a braking solution that would keep production humming without breaking the budget.

“We were getting a lot of brake failures on the original motors,” says Snider. “The original motors come with motor brakes included, which is just an electric brake on the back of the motors.” Every time the brakes failed, production would halt until the brakes were fixed or production was routed to another palletizer. As brake failures piled up, so did the plant downtime. At an hour plus for each breakdown, Snider soon noticed a substantial loss of production time,

“It takes at least an hour to switch to a different line and get production up and running again. It was easier to just fix the machine than to change the lines,” comments Snider. “When the brake motors need to be switched, it usually takes two to three hours.” With a production rate of six cases per palletizer cycle, a few hours of production time can lead to thousands of cases of product lost to downtime. This costly downtime along with the repair costs added up quickly.

“The cost of a brand-new brake motor was $800, but a new brake cost $500. It was three-quarters of the cost just to put a new brake on a used motor. The cost savings wasn’t there, so we just kept buying new motors. I ended up with a lot of good motors sitting on the shelf with no brakes. We wanted something independent.” Snider found his solution with Force Control.

Six years ago, Snider began by placing Force Control X-Class Posistop brakes, specifically the XB2-3S3018SN-01, onto perfectly good motors that were sitting on shelves due to brake failures, then putting those back to good use on the palletizers. Since the replacement, the new brakes have performed exceptionally well. “We haven’t had a Force Control brake fail yet,” praised Snider. “We probably would have gone through three of the old brakes in the same amount of time. We actually have had zero downtime since we have changed over to these brakes.” 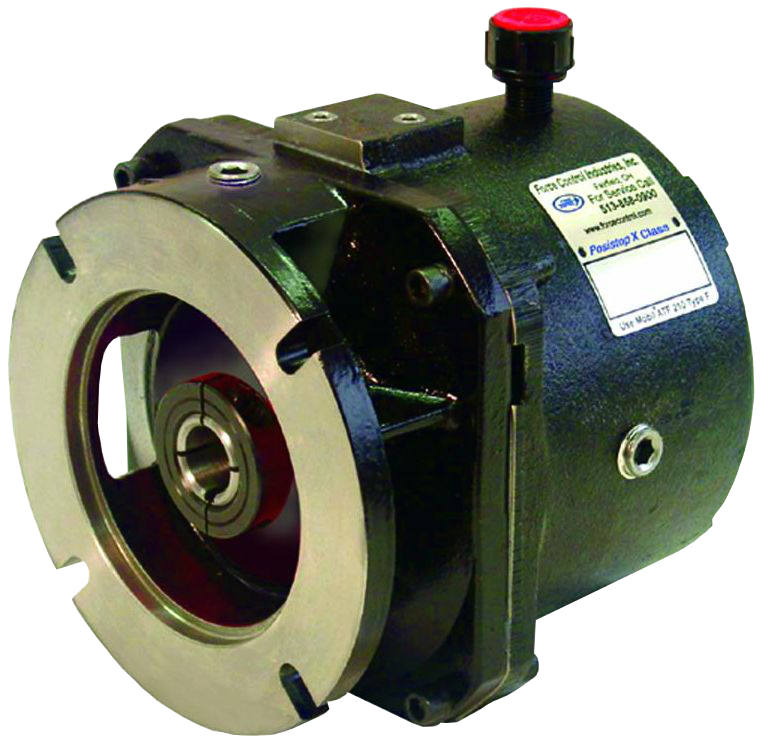 The Posistop X-Class oil shear motor and coupler brakes are designed and tested to operate over 20 million trouble-free cycles.

Force Control’s Posistop X-Class brakes work differently than the electric brakes initially put on the palletizer motors. Electric brakes use an electromagnet to apply friction between brake shoes and the brake drum that holds these components together. The brake shoes act as a sacrificial surface because the direct, dry friction causes wear and requires frequent maintenance and adjustment. The Posistop X-Class brakes use oil-shear technology to reduce maintenance and wear and thus extend the life of the brake. 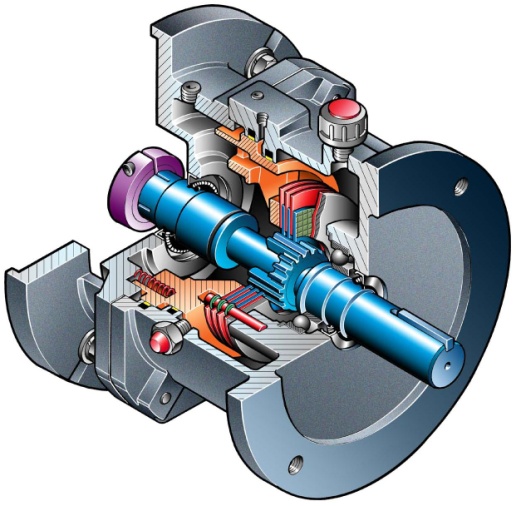 A Clamped-Split-Quill shaft connection system stops play that could deform the key and keyway in high-torque, high-cycle applications.

Snider also likes how easy it was to install the new brakes. “It was easy due to the fact the manufacturer of the original brake motors ran two wires to control the brake. We took the wire for motor control and wired a relay to deliver the same signal that tells the motor to run to tell the brake to release,” says Snider. “We used the same wires that were already there. It was easy to do and works really well.”

The savings due to the new brakes were outstanding. “We’re at least two to one, maybe three to one in terms of cost savings,” rejoiced Snider. “And we only began this five years ago. That’s not long in terms of the life of a motor.” With these long-lasting brakes, the savings can continue for a long time.

With easy installation, zero failures, and significantly reduced downtime, Snider is very happy with the switch to the Posistop X-Class brakes. “They’re phenomenal,” claims Snider. “We’re saving cost-wise because we’re not buying motors, we’ve had zero brake failures and zero downtime since we switched. I don’t know why they didn’t use Force Control from the get-go.”

Autonomous Guided Vehicles (AGV) for agricultural applications are being developed at a record pace. The labor-saving potential of employing these vehicles is huge. These vehicles provide an opportunity for automating many agricultural functions including seeding, fertilizing, weeding, and harvesting operations. 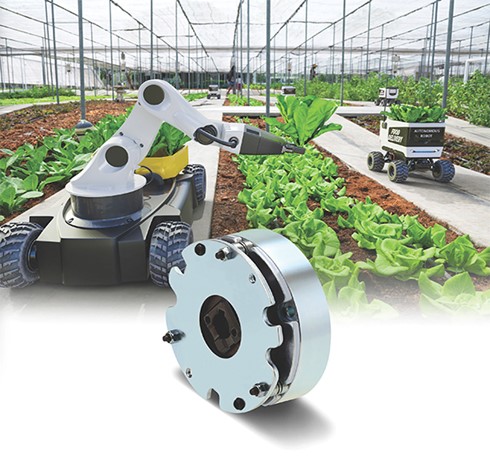 Growers supplying plant-based fast foods see these AGVs as the future for the most efficient agricultural operation. As pictured, positive positioning control of the vehicle and the robot arm is achieved using the latest Miki Pulley BXH models.

An important key to the successful use of this AGV technology is efficient and positive positioning control of the AGV vehicle and its robotic arm. To achieve this control, the newest Miki Pulley BXH Brake model is specifically designed for the control needed in the agriculture environment. The crop conditions, terrain, and environmental conditions including weather factors such as temperature, moisture, humidity, and wind have a strong impact on AGV function.

AGVs are computer-controlled, wheel-based, and battery-powered. They are load carriers with robot arms that travel across fields and throughout greenhouses without an onboard operator or driver. Their movement is directed by a combination of software and sensor-based guidance systems. As a mobile robot, AGVs follow markers or wires in the field and greenhouse floor or use vision or lasers for guided movement. Because they are unattended and long-term operation is required, power for their uninterrupted operation is important. That is where Miki Pulley’s BXH brakes excel in these AGV applications.

The AGV must have emergency braking capability as well as a default brake to hold position when not in motion. The Miki Pulley BXH brake is a power-off engaged brake that will hold the AGV in place for predetermined periods while the robot arm, also controlled by a second BXH brake, performs planting, fertilizing, harvesting, and loading operations.

When the AGV must navigate a field or greenhouse, for example, the brake is energized which disengages the rotor disc and allows free rotation of the AGV drive wheels. The BXH Brake controls the robot arm in a similar manner. The BXH brake uses 24 VDC for a split second to overcome compression spring inertia to open the brake, then consumes only 7 VDC by utilizing the BEM power control module. This saves battery power and minimizes the number of battery recharging operations needed to keep the AGV system in continuous operation.