We use cookies to provide you with a better experience. By continuing to browse the site you are agreeing to our use of cookies in accordance with our Privacy Policy.
Home » Producing Better Bearings with KISSsoft and SKF

Predicting rolling bearing performance in operation is an essential task when designing and developing transmission systems. On one hand, bearings must meet the requirements for the desired service life. But the bearing arrangement is also a major factor defining the system stiffness. In the context of gear systems, an accurate prediction of shaft displacement is of fundamental importance, especially when sizing gear tooth modifications. The accuracy of shaft and bearing modeling is thus a key element to ensure reliable operation of such systems.

A comprehensive approach to consider rolling bearing stiffness is described in the ISO/TS 16281. By modeling the internal geometry of a bearing, realistic bearing reaction characteristics can be obtained using Hertzian theory. KISSsoft had implemented this method years ago and continuously improved its application. In combination with its efficient finite difference solver, this allows an adequate and fast shaft analysis and helps to quickly design and size gear systems including tooth modifications.

To calculate the bearing reaction, the ISO/TS 16281 requires details on the internal geometry such as number of rolling elements, rolling element diameter, length, and pitch diameter. This is typically referred to as the bearing’s internal macrogeometry. Bearing designers and manufacturers also optimize and tune further details, such as raceway and rolling element profiling. Since these details are sensitive intellectual property, usually no information is available about this so-called microgeometry. On the other hand, it is typically not very difficult to obtain the macrogeometry from a bearing. Although mostly not available as bulk data, these values can usually be derived from the drawings provided by the manufacturers.

KISSsoft comes with a large bearing database with catalog data of thousands of bearings from several manufacturers. Most of these bearing records do not include internal geometry data. For the user of the software, it would be inefficient having to input more than just a handful of bearing internal geometry details. To still enable the profound bearing stiffness and rating life model of the ISO/TS 16281, KISSsoft estimates a bearings internal geometry based on the rating numbers, dimensions and other characteristics.

Unlike the catalog methods such as the ISO 76 or the ISO 281, which are more of a postprocessing kind, the ISO/TS 16281 is an integral part of a gear system calculation. A bearings stiffness is nonlinear and therefore very much dependent on the operating point, i.e., the load, displacement/misalignment as well as the bearing clearance. From a calculation point of view, this means that an iterative approach is required. The bearing stiffness affects a bearings reaction force, the bearing reactions forces affect the bending of a shaft system and that bending again defines the operating bearing stiffness. The calculation is considered successful, also referred to as converged, if no more relevant changes between the iterations are detected.

In a single iteration step, the bearing calculation can be considered independent of the surrounding shaft system and encloses distinct boundaries, or more appropriately, a clear interface. As a main input, simply the displacement and rotation of the inner versus the outer ring are required. In return, the calculation provides the corresponding reaction forces and moments as well as an operating bearing stiffness matrix. These results can then be used in the shaft calculation for the next iteration step.

This well-defined interface makes the underlying bearing calculation interchangeable and allows for a very modular setup. Following exactly this design philosophy, a new SKF bearing stiffness cloud service was integrated as part of collaboration project into the latest KISSsoft release: The shaft systems calculation remains the same, but the bearing calculations themselves are performed in the SKF cloud, connected through a web API. That approach gives KISSsoft users significant benefits for their SKF bearing calculations: The SKF calculation service itself has access to detailed macro and microgeometry and involves decades of experience in calculation-based prediction of bearing performance. There is no need for the KISSsoft user to have access to any of these internal details, as the modular interface simply requires the cloud service to return a bearings reaction force, reaction moment and operating stiffness. Furthermore, the new SKF service also provides nominal and modified reference rating life results, considering those internal geometry details as well.

Running a shaft system calculation with several bearing calculations performed on a cloud service would typically result in a major increase of calculation time, as each iteration incurs a call to the interface through the internet. Therefore, KISSsoft internally first runs the calculation with its own implementation of the ISO/TS 16281. Like this, a reasonable initial state can be used when switching to the SKF bearing cloud service, thus requiring only a couple of additional iterations through the web interface. 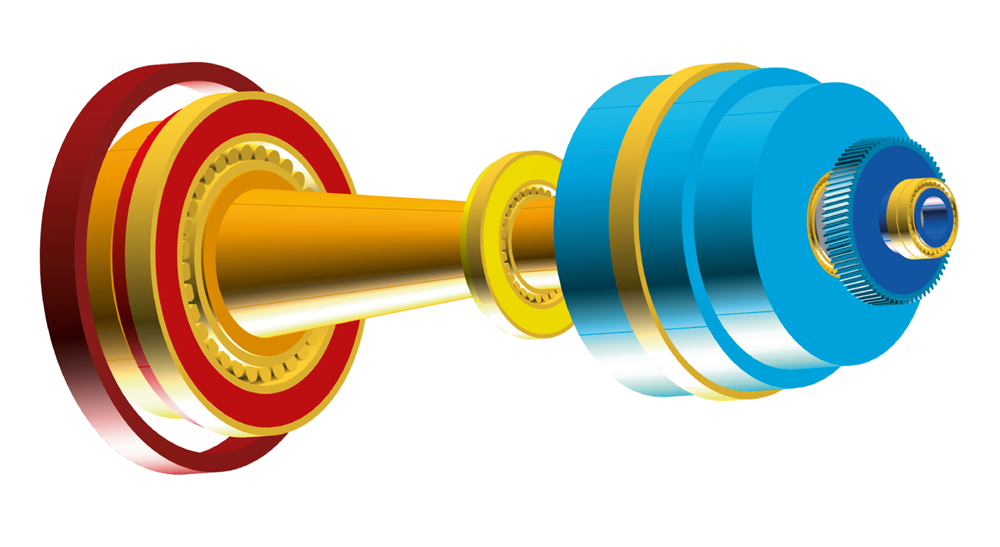 By using the new SKF bearing stiffness cloud service in KISSsoft, users can obtain more realistic calculation results for their shaft designs with SKF bearings. This propagates to all subsequent and connected gear and system calculations including tooth modifications sizing and improves the design scope. It is considered that cloud-based calculation and data access are an overall trend and other bearing manufacturers are expected to provide similar services in the next years as well. For the users of gear design software, such as KISSsoft, this is well appreciated as it drastically reduces the gap between standardized and publicly available information and nondisclosed, proprietary manufacturer know-how.

A Look at SKF's Connection to KISSsoft