We use cookies to provide you with a better experience. By continuing to browse the site you are agreeing to our use of cookies in accordance with our Privacy Policy.
Home » Global Industrial Outlook: Weathering the Storm

Last issue (Sept.) we explained how bad energy is getting. So on to alternatives.

We confirmed that municipal finances continue to improve, leading to continued activity on projects originally planned for 5, 6, and 7 years ago finally being released.

Speaking with a publicly traded pump manufacturer that tends to focus on small-to-mid-size municipal water systems, we gleaned the following:

We think these trends will continue at least through 2016, albeit with oil and gas comparisons eventually (hopefully) stabilizing.

So what/where are the silver linings when the entire machinery sector, ex trucking, is getting whacked?

Bombardier operates in two business segments: Commercial Aviation and Rail. This company matters to you if you supply engine components or related systems to Pratt & Whitney on its geared turbo fan (GTF) engine slated to launch on the significantly delayed C-Series jet.

That chart looks…awful. The company is over two years late on C-Series entry into service (hoping for certification in November), which has cost orders, replaced senior management, and is currently running around seeking cash so they can ensure getting aircraft into commercial production.

If you are a supplier on the GTF engine, this appears worrisome, but take heart — the GTF is extremely important to United Technologies (owner of Pratt & Whitney) and the AOFUTXEWSF (Association of Former UTX Executives Who Speak French) has taken over at Bombardier. They will get it into the air.

Further your career: On July 1, 2015 I took over as Chair (and Lecturer) of Graduate Business Programs at Aurora University. The Dunham Graduate School of Business MBA with a Leadership concentration is ideally suited for technical or engineering professionals seeking to gain the business skills, tools, and mentorship to further their careers. AU also offers adult degree completion programs. 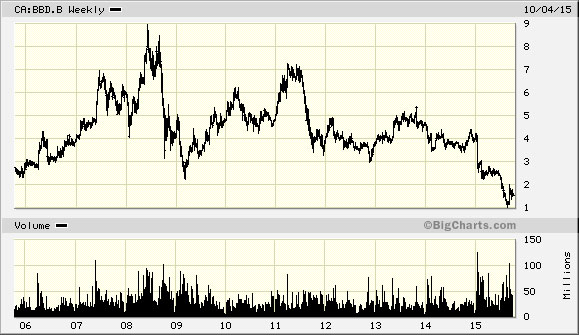 Contact blangenberg@aurora.edu to arrange for a phone or in-person discussion.

Brian K. Langenberg, CFA has earned recognition as a member of the Institutional Investor All-America Research Team, a Wall Street Journal All-Star, and Starmine Best on the Street. As Principal of Langenberg & Company, he advises CEOs and senior executives on strategy and capital markets, and makes numerous public speaking appearances. In July 2015 he was named Chair (and Lecturer)of Graduate Business Programs at Aurora University.