We use cookies to provide you with a better experience. By continuing to browse the site you are agreeing to our use of cookies in accordance with our Privacy Policy.
Home » MPTA Remains a Viable Resource for Power Transmission Industry

The Mechanical Power Transmission Association (MPTA) was founded in 1933 as the Multiple V-Belt Drive and Mechanical Power Transmission Association, adopting its current name in 1961. The group dedicates its efforts to the promotion, growth and products such as sprockets, pulleys and other drivetrain-related components. Based in Naples, Florida and approaching its 75th anniversary, the association was one of the first to develop power transmission standards programs for the industry. As such, they continue today to be deeply involved in setting industry technical standards and publishing technical manuals and other valuable information.

As with most industry associations, the opportunity for networking and the give-and-take of ideas and observations is central to the MPTA’s existence. 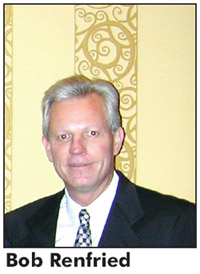 Bob Renfried, MPTA executive director, says “It’s getting to know their industry peers” that is important. “I’ve heard many times how they (company members) encounter a problem at some point, and because they know individuals personally (through MPTA), they can call and ask them, ‘Have you guys encountered this?’ because of the relationship. It’s accepted, where it might not be the case if it were a competitor they don’t know personally.”

It is that kind of back-and-forth that makes membership in MPTA essential, according to Renfried.

“It means so much more when a peer or (friendly) competitor of theirs calls and says ‘Look, this is what we’re gaining out of this association, or ‘We’re working on this,’ etc.” But perhaps the central reason for MPTA membership is the ability of its member companies to be closely involved with the development and ongoing tracking of industry standards relative to power transmission applications involving sprockets, pulleys, etc.

“Standards are reviewed at every meeting,” Renfried says. “We use what ANSI does in requiring our standards to be reviewed or reaffirmed at least every five years. A new standard will begin with a draft from a committee or member company representative. Drafts will be reviewed at meetings or, in some cases, via conference calls. We use the consensus method to approve the draft.”

Renfried points out that—given their need for each other—the MPTA also works closely with the Rubber Manufacturers of America (RMA) in establishing standards, or at least for applications involving drive belts, for example. And while the MPTA publishes its standards free of charge on their website, those developed in conjunction with the RMA are for sale with the proceeds going entirely to the latter.

Cooperation with the RMA also extends to the MPTA’s two annual conferences in the spring and fall. A technical representative from RMA attends in order to bring members up to date on any standards developed jointly. (In addition, “special association meetings” may be scheduled at any time by a majority vote of the board of directors.)

The conferences present members with the opportunity to discuss new products, technology and annual forecasts, among other things.

“Another major benefit of membership would be the collection and dissemination of sales statistics,” says Renfried. Each member company reports monthly sales to the MPTA and participants receive aggregate totals. (In addition), the MPTA is currently working on adding chains and sprockets to the existing elastomeric couplings and belt drives reports that are now available.

Also of benefit to member companies is the association’s monthly statistics program, as well other periodic surveys, all of which serve to closely track sales, trends and other factors central to the mechanical power transmission industry. It is, however, a you cannot-win-if-you-do-not-play scenario. Only member companies that supply sales data and respond to MPTA surveys are entitled to receive the published results.

Beyond that, Renfried lists the essential reasons for the MPTA’s creation:

• To promote the manufacture and sale of mechanical powertransmission equipment and increase public interest in such equipment.

• To encourage constant improvement in standards of manufacturing and engineering practice.

• To serve its members in matters of common interest and to appear for its members and for the industry before legislative committees, government bureaus and other bodies in regard to matters affecting the industry.

The basic requirement for joining the MPTA is that a company be “actively and substantially” involved within North America in the “design, manufacture and sale” of mechanical power transmission equipment for at least one year prior to applying for membership. Officers include a president, vice president, secretary, treasurer and executive director. All officers are chosen primarily from the active membership and serve without compensation, although some are recruited from the outside at an agreed upon salary.

In order to blanket its targeted industries, the MPTA is divided into three member company categories—belt drive and pulley; elastomeric coupling; and chain and sprocket. A partial list of the MPTA’s 24 member companies follows: