We use cookies to provide you with a better experience. By continuing to browse the site you are agreeing to our use of cookies in accordance with our Privacy Policy.
Home » Rain or Shine 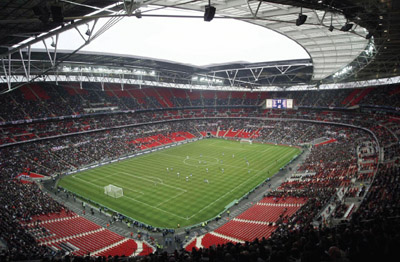 More than 90,000 spectators will watch the English national football team at Wembley Stadium in London without knowledge of the engineering magic occurring high above the field of play. Wembley, the world’s largest covered stadium, boasts a retractable roof newsworthy simply for its daunting size and scope.

While retractable roofs are nothing new to sports fans, Wembley is an unusual case due to the amount of materials and equipment involved in the makeup and design. Brevini Power Transmission, a global producer of planetary gears and mechanical transmissions, is one of many companies that contributed to the project.

The 7,000 ton roof is partly retractable, exposing Wembley’s famous turf to direct sunlight and ventilation. It can be moved up to the touchline on the field, ensuring every fan is sheltered from inclement weather during events. With the roof open, the sun reaches all corners of the field. The architects even employed astronomers to calculate the sun’s position on May afternoons so that at three o’clock on the final day of the FA Cup only the two southern corner flags are in shadow, according to the Wembley Stadium website. (A small, albeit important, step to ensure television cameras don’t have to deal with heavy shadows during matches.)

Retractable roofs have been considered achievements in architecture since the Skydome first opened in Toronto in 1989. The Skydome (currently known as the Rogers Centre) was the first stadium to boast a fully retractable roof. It consists of four sections that close or open in 20 minutes. Since opening, the Skydome has been used as a model for similar stadium projects around the globe.

None of these projects, however, has compared to the task of creating the retractable roof for Wembley. Dennis Van Arkel, sales manager of Brevini Benelux, a subsidiary of Brevini Power Transmission, says the technical support from the very beginning of the project made the job easier for Brevini.

The fixed part of the stadium roof is attached to one side of an imposing metallic arch that weighs 1,750 tons, is 133 meters tall and has a span of 315 meters. The arch supports more than 60 percent of the roof’s weight. On the other side of the roof are seven sliding panels that can open and close to protect the spectators or eliminate shadows.

Hollandia-Bailey Technogroup, working with Brevini Power Transmission, supplied the rack and pinion system for the project, much like they did for the Ajax Arena in Amsterdam and the Veltins Arena in Gelsenkirchen, Germany.

“The one-piece segments of the roof at Wembley were much bigger than what’s been done with other stadiums,” Van Arkel says. “To keep such huge weights under control, you have to build in several safety levels taking into consideration wind, snow, ice, rain, etc.”

Thirty-four Brevini planetary gear units help the panels above Wembley Stadium slide perfectly into place. These panels move at a speed of 30 mm per second, and come in different sizes and shapes with weights ranging from 63 to 330 tons. They move on roof trusses 160 meters long, opening and closing the roof in just 15 minutes.

Van Arkel says the experience Brevini has had with these applications since 1993 is the reason their gear units were chosen for Wembley.

“The Brevini units delivered for Ajax Arena have been reused without any review since the electrical system has been renewed,” Van Arkel says. “The gearboxes have been working for nearly 15 years without any problem, and they’ll run for another 15 years for sure.”

In addition to the rack and pinion system, Brevini customized a transparent Perspex cover that protects the units from harsh weather conditions. This was a special request from the main contractors at Wembley.

“We’re always proud to be involved in the kind of project that shows our capability and the trust big companies have with Brevini Power Transmission,” he says.

The president and founder of Brevini Power Transmission, Renato Brevini, says Wembley signifies the level of cooperation Brevini has with their clients.

“We serve our clients through an international network of 24 subsidiaries that are able to design projects and customized parts. This approach ensures customer satisfaction in every phase of Brevini’s relationship with the market.”

The company is currently involved in several other projects, including the steering system for the Queen Elizabeth Cruise Liner and a special boat lifting system in Dubai with partner Bosch Rexroth.