We use cookies to provide you with a better experience. By continuing to browse the site you are agreeing to our use of cookies in accordance with our Privacy Policy.
Home » The Art of the Rebuild

The Art of the Rebuild

The Art of the Rebuild

2020 — in short — was complicated. The world was essentially closing down, companies were scrambling to create remote offices and work travel was limited. Unfortunately, even during a pandemic — critical components need to be upgraded and/or replaced in many applications.

The Huxtable Pumping Station, operated by the Memphis District of the U.S. Army Corps of Engineers (USACE), serves to prevent flooding in Lee County, Arkansas, a mostly rural county in the Mississippi Delta that includes 1.2 million acres of farmland.

According to the last U.S. census, the county had a population of 10,424 with a median household income of $23,716 and 42.6 percent of the population living below the poverty line. Bordered on the east by the Mississippi River, Lee County also has two smaller navigable rivers, one of which is the St. Francis. 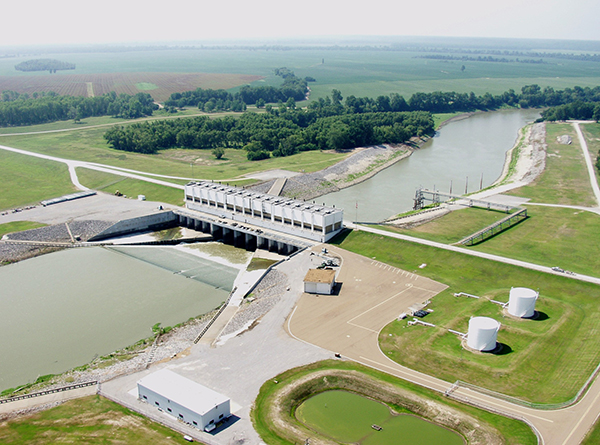 Navigating the Equipment and a Pandemic

In 2019, two 50-year-old gearboxes were damaged, leading to an operational failure that threatened nearby residents with potential catastrophic flooding.

“The pump station had ‘a high-water event’ in 2019 which may have overloaded the pumps and the gearboxes,” said Craig Massa, vice president — sales, at Atlanta Gear Works.

Thankfully, Atlanta Gear Works, located in Dawsonville, Georgia, had a successful track record with other USACE projects and the company was awarded the contract to repair/rebuild the components in March of 2020 — right when things globally were beginning to shut down due to COVID-19.

Management at the plant had analyzed the failed pumps and estimated the time needed to get them up and running again to be a year, but like many large projects, the problems turned out to be more complicated than initially thought, according to Massa.

“The original job specs required the contractor to rebuild the two failed gearboxes on site,” said Massa. “They knew they had a broken shaft and other wear, but we knew the repairs would be complicated and wanted to bring them back to our shop [in Dawsonville] because of our infrastructure.”

“We began work on the Huxtable project right at the beginning of the pandemic, so there were a lot of unknowns,” Massa added. “We followed CDC guidelines with face coverings and social distancing, etc.”

Field repairs in this industry can sometimes begin as a guessing game.

“You really do not know if there is any other damage than what can visibly be seen until you disassemble and inspect the gearbox. With a field repair, you are sometimes limited to what can be done, and therefore repairing in a shop environment is always preferable,” Massa said. 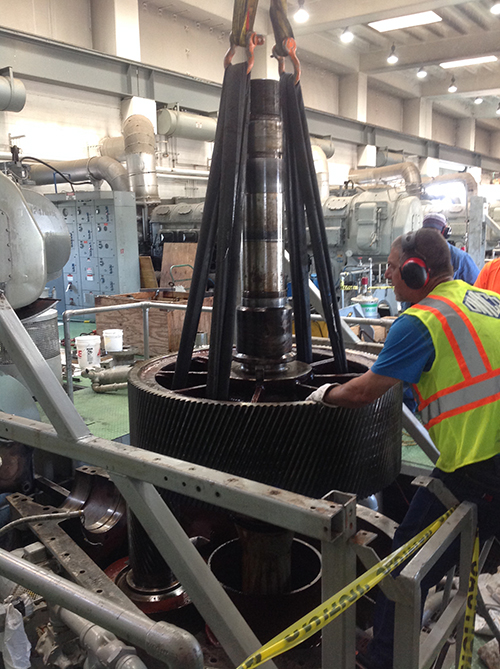 Disassembly and removal of one of the gearboxes.

For the first gearbox, the team made all new gears, plus a spare set. In addition to the original specs, they identified that the thrust bearing and backstop needed to be refurbished and the lubrication pumps and coupling disc packs needed to be replaced.

For the second gearbox, they were able to use gears provided by Huxtable. Since the intermediate pinion shaft had sheared and greatly damaged the gears, to prevent future failures, they made a modification on the gears on that shaft at the point where it broke to reduce stress concentration. They also refurbished the thrust bearings and the backstops to prevent the gearbox from running in both directions.

At the request of plant management, to reduce future wear and tear, they also hired and supervised a subcontractor to perform vibration tests on a total of ten gearboxes and overhauled where necessary. “We took a baseline vibration reading for all ten gearboxes,” said Massa, “because proper preventive maintenance requires regularly scheduled vibration testing.”

The field service team and the company’s extensive field service rig, under the leadership of AGW Engineer Taylor Simms, made two 500-mile trips to the site for removal and installation of the gearboxes. Altogether, 20 people worked on the project, and most of the actual repair work took place in Dawsonville.

Late last year, Atlanta Gear Works invested in a 24-tool ATC+C vertical boring mill featuring a turning diameter of 36 inches and a height of 24 inches — all capable of turning a workpiece of up to 4,000 pounds. It joined six CNC (computer numerical control) turning lathes and two manual lathes enabling the team to produce parts faster and more efficiently than with slower lathes, with the added benefit of deeper and sharper cuts. This equipment means faster turn-around time for customers with no sacrifice in quality, resulting in fewer machining hours per job and ultimately lower-cost repairs.

Massa summarized the pump station project by saying that Atlanta Gear Works’ expertise and knowledge of gearbox repair and gearing helped the team to accurately estimate the repair cost and the timeline. “This led the team to successful execution in less time than originally estimated — two months ahead of schedule,” Massa said.