We use cookies to provide you with a better experience. By continuing to browse the site you are agreeing to our use of cookies in accordance with our Privacy Policy.
Home » The Influence of Bevel Pinion Retractability on Casing Design

The Influence of Bevel Pinion Retractability on Casing Design

The Influence of Bevel Pinion Retractability on Casing Design

The FVA-Workbench is a manufacturer-neutral tool for the simulation and calculation of transmission systems. As product development cycles become shorter, powerful modeling approaches and calculation algorithms become increasingly important. The predominantly analytical approaches in the FVA-Workbench deliver fast and reliable solutions to all important issues related to drive technology. For bodies that cannot be well described analytically, the results are supplemented by numerical methods. The intuitive modeling techniques in the FVA-Workbench guarantee consistent, valid, and manufacturable gears every time.

The calculations are developed, analyzed, and validated in research projects by Forschungsvereinigung Antriebstechnik e.V. (FVA, the German Research Association for Drive Technology). Through membership fees and public funding, the FVA is able to organize 14 million euros annually in research projects at leading German universities, chairs, and research. The FVA-Workbench serves as a platform to make this knowledge accessible to all engineers.

The starting point for every calculation is the exact surface of bevel and hypoid gears and their position relative to each other. The descriptions of the tooth flank and tooth root are generated in a manufacturing simulation, taking machine settings and manufacturing deviations into account. Compensation areas are used to transform this discrete point cloud into a gapless mathematical description of the tooth surface.

The load-free tooth contact simulation is the core component of the rolling contact simulation, and can efficiently determine the key parameters of the gear. Relevant evaluation criteria include: the ease-off, the load-free working variation, the load-free contact pattern, determination of the backlash, and the axial retractability of the pinion (FVA Research Project 456 II ”BECAL - Backlash and Retractability,“ TU Dresden IMM, Prof. Dr. Schlecht).

The circumferential backlash is chosen based on the gear parameters, production quality, and the relative position deviations to be expected under load. This prevents meshing interference and gear jamming. Too little backlash can lead to jamming due to relative position deviations under load, too much can lead to increased noise and reduced load capacity.

In addition to the microgeometry, the mounting position, relative position deviations under load, and specified pitch deviations of the working and trailing flanks are considered when calculating the backlash.

In practice, bevel gears always include flank modifications. Therefore, the backlash is not constant when considered across the meshing positions (see Figure 1). The difference between the minimum and maximum backlash is caused by superposition of the working variations in drive and coast operation. The theoretical foundation for the backlash calculations was developed and implemented in FVA Research Project 223/XVIII (”BECAL – Operating Clearance,“ TU Dresden IMM, Prof. Dr. Schlecht). The influences related to backlash calculation are being reassessed in ongoing research projects in order to better reflect the actual conditions under load. 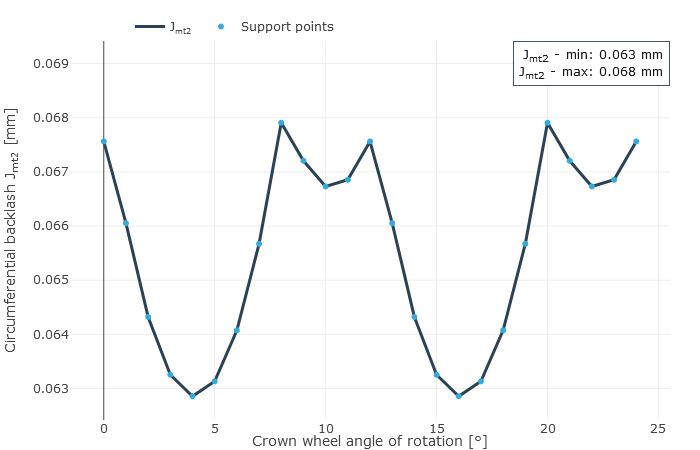 Representation of the average circumferential backlash over the angle of rotation of the crown wheel for 2 pitches in transverse section (graph taken from FVA-Workbench report).

Evaluation of the retractability of the pinion is another application for the circumferential backlash calculation. A pinion is retractable if it can be rotated out of the mesh and the pinion only moves along the gear axis. The relative position of the axis of the pinion only changes in the axial direction out of the mesh as a result. Retractability refers to both the mounting and disassembly procedures. This has an enormous influence, especially on the design of the casing. The question of whether or not the bevel pinion is axially retractable significantly influences the mounting and disassembly processes. 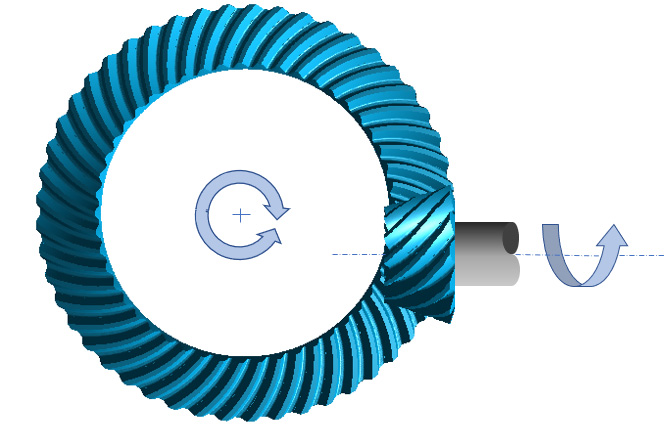 A pinion is retractable if can be rotated out of the mesh along the pinion axis.

In the FVA-Workbench, the minimum and maximum backlash over the axial displacement of the pinion are graphically represented as a result of the retractability calculation. The following three cases can occur:

The retractability results for a bevel gear with the basic geometry described in Table 1 are summarized in Figure 3. 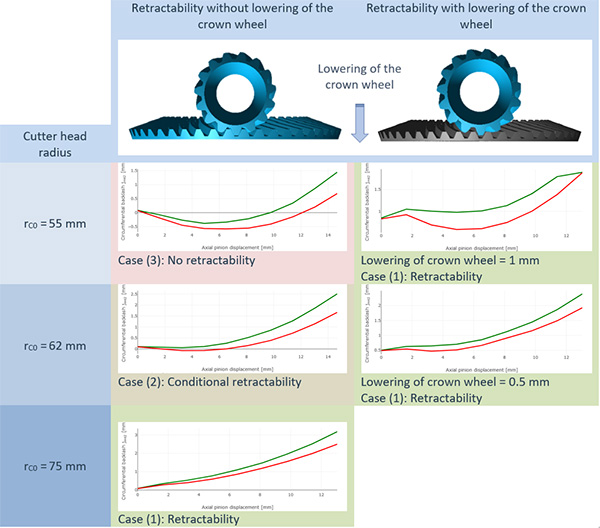 Influence of the cutter head radius and lowering of the crown wheel on retractability.

Calculation of retractability in the design phase makes it possible to draw important conclusions on the design as well as the requirements for the gearbox environment (casing). If the pinion is not retractable in the initial bevel gear design, the design can be adapted until retractability is achieved. The FVA-Workbench can quickly and efficiently calculate the effectiveness of these changes. 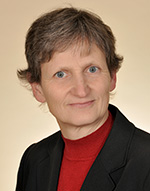