We use cookies to provide you with a better experience. By continuing to browse the site you are agreeing to our use of cookies in accordance with our Privacy Policy.
Home » Highly Sophisticated War Machines are Tilling New Battleground

A common if not somewhat cynical reference to our nation’s array of military capabilities is thinking of it as a “toy box.” And of course if you’re going to have a toy box you have to have toys for it.

And holy Pinocchio, do we have toys. Some question the need for so many playthings; some, like the DOD, question why we don’t have more.

But without delving into which side of the argument one chooses, what follows are some examples of the technical wizardry that helps keep us safe. What’s more, much like NASA, some of these mechanical monsters will one day be reworked for civilian use. Let’s take a look.

First up—the WildCat Robot from Boston Robotics. It can “run across any type of terrain, since its main purpose is either a cargo-carrying unit or an intelligence-carrying unit.” For example, sand dunes pose no obstacle to this leggy warrior. Always in continuing improvement mode, the WildCat currently travels at about 16-25 mph on flat terrain — using a bounding and galloping gait. Imagine a squad of these guys coming at you with no place to run. While this iteration is not a killing machine, gathering enemy intelligence can lead to dire results for the bad guys. 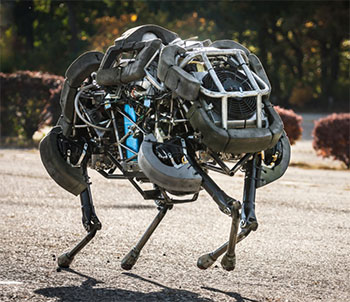 Manufactured by a Volvo subsidiary, this tongue-twister debuted at the 2019 Paris Air Show. It’s considered a light-armored vehicle that commissioned for service as early as this year. The Scarabee boasts a hybrid drive with ICE (Internal Combustion Engine) and electric motors that provide silent, fully electric operation on missions requiring stealth or long-term reconnaissance. It has a payload rating of 4,000 pounds and remote control capabilities. It weighs in at about 6+ tons, and is powered by a 300-hp diesel engine and an electric 103-hp motor. Lastly, the Scarabee (that’s French for beetle, by the way) has an all-wheel steering system that is used for crab-walking across terrain when needed.

Currently in various phases of testing, combat-resistant rotorcraft is another “martial arts” creation. For instance, its coaxial, co-rotating rotors are intended to result in quieter hovering, a feature that any combat soldier — or enemy — can appreciate. “The purpose of this program is to generate some limited ballistic data that could reduce risk and/or encourage future vertical lift designers to consider CTEF technology,” said Brian G. Smith, ARL-SLAD (Army Research Lab/Survivability/Lethality Analysis) aviation analysis team leader. What’s more, the Army consider helicopter noise reduction technology a top priority in future rotorcraft design. (An unforeseen benefit: Imagine a future president heading for Marine One, pretending he can’t hear questions being screamed at him by reporters.)

This workhorse is designed to undertake certain tasks otherwise done by infantry soldiers, such as convoy protection, armed reconnaissance and others. It moves on six wheels, but these can be replaced with tracks. The robot is capable of traversing uneven terrain and going over some obstacles such as low walls. Robattle’s modularity allows it to be fitted with robotic arms, radars and weapons, allowing it to engage in combat. As such, sensitive systems in the Ro-Battle are redundant to allow it to operate after taking damage. The vehicle weighs 7 tons and has the capability of carrying up to 3 tons and communicates using 4G cellular technology.

This has just been a glimpse of the developed and under-development equipment being commissione3d by the military, with price tags in the millions. But there’s one aspect to many of these battle machines that cannot be minimized — they are primarily unmanned machines of war. The irony is that while these are highly sophisticated, lethal “war toys,” the fact that they are unmanned can at least help in reducing body counts.