We use cookies to provide you with a better experience. By continuing to browse the site you are agreeing to our use of cookies in accordance with our Privacy Policy.
Home » Blogs » Revolutions » Freudenberg Aids High Flying Wind Farm

Wind farms are expanding around the world. This is good for climate change. Wind turbines are being installed on the high seas with nacelle heights of more than 100 meters and rotor diameters of nearly 170 meters. This increases both the electricity yield and economic efficiency. Freudenberg is aiding wind power’s conquest with high performance components and materials.

For German speakers, the name may have a military overtone, but it is in fact a designation for a reef in the Baltic Sea lying beneath the ocean’s surface. Here, in the middle of the ocean between Germany, Denmark and Sweden, “Kriegers Flak” wind farm is rising from the sea to an area of over 132 square kilometers. At dizzying heights of more than 100 meters, massive towers are being erected bearing nacelles and 80-meter blades, giving the wind turbines a total height of almost 200 meters. By comparison, Cologne Cathedral is only 157 meters high. The latest generation of 72 turbines being built at Kriegers Flak are among the most powerful in the world; each individual turbine can generate up to eight megawatts of electricity. And with good reason. The more powerful turbines require smaller foundations, fewer towers and fewer cables relative to the energy yield – and can thus be run more efficiently. More and more turbines can now operate without government support. Wind power is thus being established as an independent, climate friendly energy form. 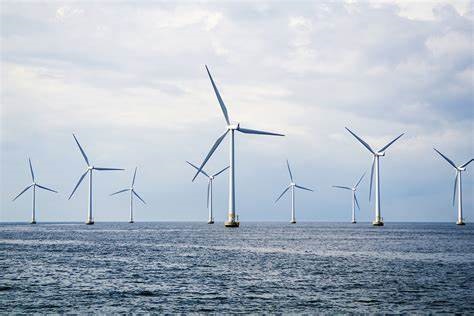 In a recent issue of the company's e-magazine Spirit, Freudenberg examined the challenges of improving energy efficiency in wind farms.

Multi-megawatt wind farms on the high seas bring more than higher yields. Even though the power generated by each turbine increases with the blade surface, the harvested winds place greater strain on components such as the primary bearings or the rotor blades. The same applies to the seals that Freudenberg Sealing Technologies develops for wind turbines. The seals help keep sand or salty water from penetrating machine elements through important interfaces such as where yaw bearings between the tower and nacelle meet, the rotor blade bearings as well as the primary bearings. They also help make sure that lubricants remain securely in the interior. Increased winds make this all much more difficult. Freudenberg Sealing Technologies has thus developed a special Seventomatic seal for extremely large shaft diameters. Instead of the old radial springs, Seventomatic seals use a meander spring, which makes the seal less susceptible to big movements and dislocation of the main bearing. The greater flexibility enables better compensation exceeding several millimeters and prevents unwanted leaks.

Wind turbines have an entire series of friction points where the use of specialty lubricants can help eliminate or alleviate wear and tear. The lubricants increase the wind turbine’s efficiency and component operating life – helping improve operating efficiency. Also, the less lubricant used, the lower the logistic expenses needed to organize lubricant replenishment, making maintenance more efficient, which can be very costly in offshore farms on the high seas.

Special oils are normally used in transmissions, while for the main bearings, the rotary bearings and bearings in the generator grease is used. The yaw gear drives used to shift the rotary blades and the nacelle to track the wind also need to be efficiently lubricated. Klüber Lubrication has developed a family of three special lubricants and precisely tailored them to the various applications, making them suitable for all the lubrication points in a wind turbine. The lubricants are biodegradable – whenever necessary for the application.

In addition to lubricants, Freudenberg Group companies supply other specialty products: ChemTrend manufactures mold release agents needed in the manufacture of rotor blades – a very complex, extremely sophisticated manufacturing process. The blades are “baked” in molds. Thanks to mold release agent the components can be removed safely from the tool and without any damage to the surface. OKS supplies biodegradable cleaning agents, used to clean turbine blades during operations. SurTec manufactures chemical surface treatment products, such as those used to protect against corrosion, and which help to guarantee a long life for the components and fasteners.