We use cookies to provide you with a better experience. By continuing to browse the site you are agreeing to our use of cookies in accordance with our Privacy Policy.
Home » Preventing Roller Bearing Failure

I’m building a custom gearbox with 7075 T-6 spur gears, and I’m concerned that aluminum flakes will enter the races on the roller bearings (SKF 2307) and cause premature failure. So my question is — should I place an oil seal on the shaft first to protect the bearing — or is this an unfounded concern and I should mount the seal in the typical manner outside the bearing? Or both? Or go with a sealed bearing? I’m confused and could use your expertise, please.

Expert response provided by Norm Parker, bearing technical specialist for GM’s driveline division at the Milford, MI Proving Grounds: Well, I have good news and I have bad news. The bad news is — you will likely get aluminum particles in your bearings. The good news is — it probably doesn’t matter. 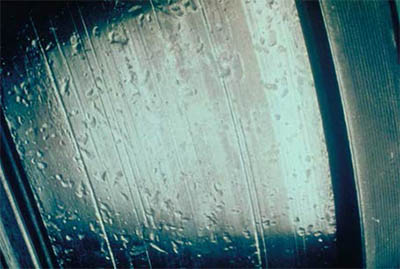 So back to the two camps of particles; we have small and we have large particles. I know — they aren’t “thaaat” large; but what we are talking about are particles that are large enough to create a small stress riser in the surface — which can lead to spall. These particles create dents that are large enough to see. If you made me draw a line in the sand between large and small particles, it would be around 50 microns. You can see in Figure 1 that these dents are quite large — well over 200-300 microns. This type of denting usually comes from something else actually failing. That “something” is often another bearing or some type of external contamination. The debris created by a gear mesh is much finer than this. Gear wear particles are closer to 10-30 microns. Those can still be troublesome if they are in heavy enough concentration, but unlike this visible denting, small debris creates a wear mechanism. Certain wear mechanisms can be a problem for some ball bearing applications, particularly for angular contact bearings that are preloaded and under heavy loads. The particles tend to concentrate in the center of the raceway and can eventually start degrading the surface and lead to premature failures.

You will not find any shortage of information meticulously breaking down the specific amount of contamination to bearing life degradation; use some caution with that. I have found many instances where new oil had more contamination than the recommended operating condition. All you can really do is run it and see how it does. If you are seeing raceways like I have (Fig. 2), then you are likely generating a lot of particles. But that in itself doesn’t mean your system is doomed to failure. The good news is that aluminum is very soft compared to bearing steel and other common wear mechanisms we see in our systems such as gear steel and external contaminants like the fine Middle Eastern sand (Fig. 2). In the unlikely event that you do start seeing early failures, (which I doubt you will), almost all of the top bearing companies offer some sort of debrisresistant bearings. These usually involve some sort of additional surface hardening. There is quite a difference in performance/contamination between a typical 60 HRC bearing and a premium 65’ish HRC bearing. Either way — I wouldn’t lose any sleep over this application. 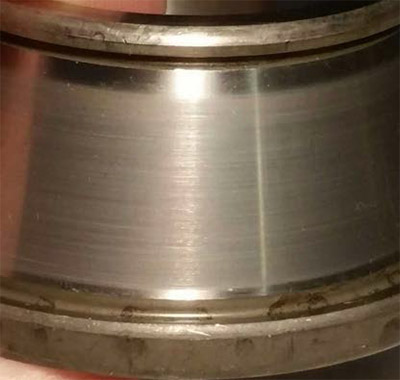 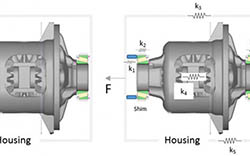 Norm Parker is the bearing technical specialist for the driveline division at General Motors LLC. Located onsite at the Milford (MI) Proving Grounds, he is regularly tasked with testing theoretical models in the real world, in real time. With his bachelor and master degrees in mechanical engineering from Oakland University (Rochester, Michigan), Parker has developed a keen interest in the academic, commercial and engineering aspects of the bearing industry. Prior to joining GM, he rose through the ranks of traditional bearing companies; by so doing he acquired invaluable experience in working with some of the largest customers — with the toughest applications and demands — on the planet. Parker plans to continue expanding his expertise and providing substantial personal contributions to bearing technology through metallurgy, design and processing.