We use cookies to provide you with a better experience. By continuing to browse the site you are agreeing to our use of cookies in accordance with our Privacy Policy.
Home » Voith Announces Management Changes

The Shareholders' Committee of Voith Management GmbH has decided about the succession of Dr. Hubert Lienhard, long-standing president and CEO of the management board. Stephan Schaller, currently member of Voith Shareholders’ Committee and head of the global motor-cycle division of BMW Group, has been appointed as successor. As planned, Lienhard, who has been in charge since 2008, will retire in 2018 upon completion of his second term in office at the age of 67. The change at the top will take place on April 1st 2018.

Schaller, born in 1957, studied mechanical engineering at Rheinisch-Westfälische Technische Hochschule (RWTH) Aachen. From 1981 to 1999, he held management and executive positions at BMW Group. After four years, initially as head of technical planning, then in the technical management of Linde AG's refrigeration division, Schaller joined Volkswagen AG in 2004 as head of production for the commercial vehicle division. Since 2007, he has been chairman of the board of management of commercial vehicle brand of Volkswagen. In 2010, he became vice chairman of the executive board of Schott AG before being appointed head of the global motorcycle division of BMW Group in June 2012. Schaller has been a member of the Shareholders' Committee of Voith since October 1st 2015.

At the same time, Dr. Hubert Lienhard will be appointed to the Shareholders' Committee with effect from April 1st 2018. He will take the current seat of Stephan Schaller in this committee.

“With Stephan Schaller we found the ideal successor for Dr. Lienhard. He has already been involved in all strategic developments of the company in recent years in his role as member of the Shareholders' Committee. He has excellent knowledge of Voith and its structures. In this way, we ensure a high degree of continuity for the company in succession. At the same time, Stephan Schaller brings with him many years of international experience in various sectors and industries outside Voith. Among others, he held leading positions in two of the world's largest automotive companies. We are pleased that we were able to win such a distinguished leader from German industry for Voith," said Professor Dr. Hans-Peter Keitel, chairman of the Shareholders' Committee of Voith Management GmbH and Supervisory Board of Voith GmbH & Co. KGaA.

Keitel also expressed that he is delighted that Dr. Lienhard has agreed to contribute his seventeen years of extensive experience within Voith to the Shareholders' Committee and to continue his support of the future development of the Group with his expertise: "Dr. Hubert Lienhard has made an outstanding contribution to Voith in the last seventeen years, first as CEO of Voith Hydro, and from 2008 as President and CEO of the entire Voith Group. He has successfully led the Group through one of the most challenging and toughest phases of the last few decades with a clear line, strengthened profitability on a sustained basis and restored the Group's strategic ability to act by means of a far-reaching restructuring program. With his digital agenda, he has established Voith as an important player in the digital transformation in our industries. For this, he already deserves the thanks of the Shareholders' Committee and the Supervisory Board, as well as of all 19,000 employees of our company around the world," continued Professor Dr. Keitel. 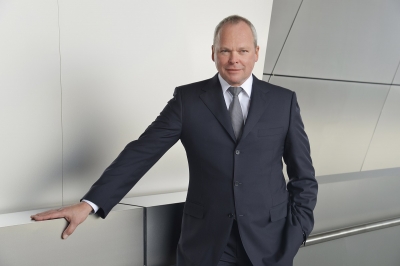