We use cookies to provide you with a better experience. By continuing to browse the site you are agreeing to our use of cookies in accordance with our Privacy Policy.
Home » Meet Harry - The Kinematic Kegler 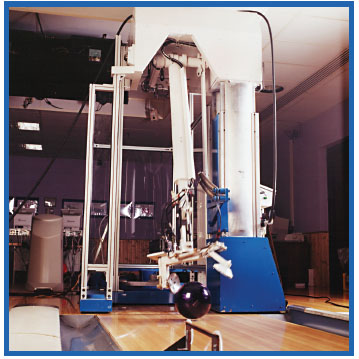 They call him Harry. He’s tall, steady and swings a bowling ball so accurately he can actually embarrass the competition. Employed by the United States Bowling Congress (USBC) in suburban Milwaukee, Harry is the consummate bowling professional.

“He’s our best employee,” says Paul Ridenour, research engineer at the USBC. “He’s always on time and he never complains about anything.”

To top it off, Harry isn’t even human. He’s a computer-controlled hybrid machine that combines hydraulics, air pressure and electronics to power his precision mechanical arm, all in the name of scientific research.

“Harry was conceived primarily because a human bowler can only be so accurate on the lanes,” Ridenour says. “We needed a more precise way to gather data on the motion characteristics of bowling balls.”

Named in honor of Harry Lawrence, a former testing facility employee, the machine was designed and constructed in the mid 1990s, and officially began working for the USBC in 1999. Using hands operated by air hydraulics, Harry can pick up and release the bowling balls and duplicate shots at ball speeds from 14–22 mph.

“Harry tosses the ball down the lane and the data is analyzed by the Computer Aided Tracking System (CATS),” Ridenour says. “We have 23 sensors on the lane that track the balls location and speed and then the data is reviewed on a lane grid.”

Harry’s hands open and close with a piston and cylinder assembly. He gets some much needed assistance from springs and gravity to propel the balls down the bowling lane.

“He’s quite a unique piece of equipment and we have a patent on the device because of this,” Ridenour says. “He’s been an intricate part of our ball motion study program and a key component to our research at the USBC.”

Bowling insiders have recently raised concerns that ball cover stocks and cores, combined with improved lane surfaces and oil patterns, are having too great an impact on scoring compared to player skill. The research “conducted” by Harry has resulted in a new manufacturing specification that will put limits on the porosity and chemistry of new bowling ball surfaces in 2009, according to a USBC press release.

While boasting incredible accuracy and scoring potential, Harry is not immune to defeat at the hands of a human opponent. During the 2005 Masters pre-week, professional bowler Danny Wiseman defeated Harry in a friendly match.

“He’s lost a couple of matches here and there,” Ridenour says. “One of the things about bowling is that there is a certain oil pattern on the lane, once you throw the ball you can see how the game will play. Harry is sometimes too accurate for his own good.”

Win or lose, the robot certainly knows how to have some fun. At the 2007 Masters, Harry participated in a vivid reenactment of a famous 1995 professional match where Randy Pedersen lost on what many consider the worst break in the history of the PBA.

“If you’ve never seen the Randy Pedersen meltdown, it’s worth checking out online,” Ridenour says. “Harry did a pretty good job of capturing the moment.”

While there’s plenty of other research projects on tap at the USBC, Harry will only be asked to continue doing what he does best.

“He’s a ball thrower, plain and simple,” Ridenour says. “He knows the job he has to do and he does it better than anybody else.”

To see Harry, the robotic bowler, in action, visit www.bowl.com.