We use cookies to provide you with a better experience. By continuing to browse the site you are agreeing to our use of cookies in accordance with our Privacy Policy.
Home » Mold Machining Center Maintains Accuracy 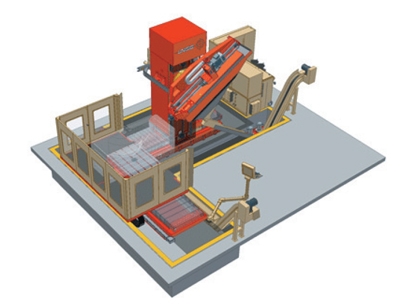 Since the machine tool was designed for four-sided machining and deep-hole drilling on workpieces up to 40" x 120" on a 25-ton CNC rotary table, a high degree of accuracy and rigidity would be needed, especially at full extension of the tool tip.

With an emphasis on high productivity, precision was also necessary even at the maximum speeds of 10 meters per minute. An ANSI 85.50 CAT 50 spindle was designed into the machine to handle the substantial torque, so a power drawbar became an essential element as well as a nearly backlash-free worm gear assembly to satisfy the accuracy spec. 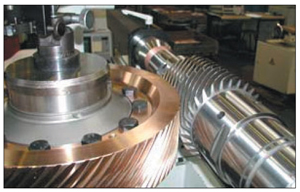 In order to meet these demands, Entrust turned to Advanced Machine & Engineering, a longtime associate based in Rockford, Illinois, to assist with the necessary components required to accommodate the load and to provide stability and repositioning. The relationship between both companies has been steady for more than five years, especially in the area of new spindle components and worm gear assemblies.

It helped that the ES series had a reputation as a quality product in the world machine tool market, according to the company’s press release, based largely on the strength of the tools being used by both Mercedes and BMW.

For the worm gear assembly, Entrust once again turned to Advanced Machine & Engineering for a solution. After looking at the available products, the suggestion was to utilize the Zahnradfertigung OTT patented worm gear design with a gear and a worm shaft that are adjusted to minimize backlash.

After investigating other worm gear designs, Entrust selected this particular design because it had the best backlash scenario for the application, namely large-area, deep-pocket moldmaking. Due to the nature of the application, a DIN standard Class 3 set of worm gears was required. Advanced Machine supplied Class 2 worm gears at no additional charge to the customer.

“A conventional solution would not work here for this precision application and the OTT worm gear set was more appropriate,” says Dan Lapp, vice president of sales at Advanced Machine & Engineering. Lapp went on to explain how the typical machine tool worm gear on the market often has a split worm, spring-loaded to compensate for backlash errors. With the OTT split worm design, the left side of the worm gear features a worm shaft while a hollow worm engages the shaft from the right. By the accurate positioning of one worm half relative to the other, the backlash can be changed.

Fettig notes that the USC50 is entirely designed and built in the United States, but incorporates key components from suppliers in the U.S., Italy, Germany and Japan. Initial customer reports on the performance of the USC50 have been positive, according to Fettig.