We use cookies to provide you with a better experience. By continuing to browse the site you are agreeing to our use of cookies in accordance with our Privacy Policy.
Home » Capacity--And the Lack of It--Rules

Capacity--And the Lack of It--Rules 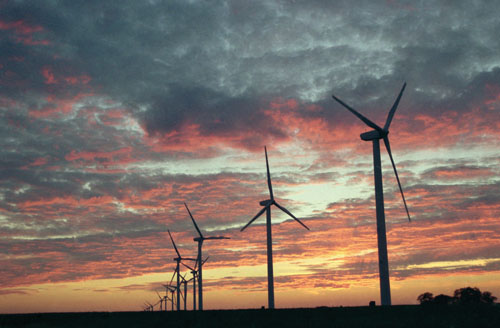 Outsized wind turbines such as these are now populating the prairies where long-abandoned grain elevators and silos once stood. The U.S. market for wind energy is huge, far outstripping industry projections and suppliers’ ability to meet the demand. (Courtesy Kaydon Bearing)

It’s a fact that bearings help make our world go ‘round. It is also a fact that now is a very profitable, yet daunting, time for bearing manufacturers as they attempt to ramp up production to meet the runaway growth of wind turbines here and abroad. Bearing makers are also enjoying an international construction and mining boom, given the bearings needed for cranes, earthmovers and other heavy equipment in those industries. However, somewhat along the lines of be careful what you wish for, that upward spike has taken a heavy toll on bearing manufacturers’ capacity worldwide, given that the extremely high-grade steel needed for bearings in those applications is also required for turbines.

All of which explains—at least in part—why there is ongoing angst among the OEMs and suppliers of perhaps the fastest-growing, domestic manufacturing segment in the United States—wind turbines. Crimps in the wind turbine supply stream—primarily gears, gearboxes and bearings—are the root cause of the anxiety, with no long-term corrective action on the near horizon. In fact, most players in the industry believe it will take up to two years for suppliers of those components—especially bearings—to catch up with the demand.

“There has been a general supply bottleneck for bearings, especially for larger sizes, as the demand for energy and the surge in wind turbine production has by far outstripped the production capacities,” says Daniel Thalmann, an application engineer with NKE Austria. “Like NKE Austria, most of the leading suppliers are expanding their production capacities, which should be in full operation in one year’s time.”

It’s all about the steel. Thalmann’s outlook is rosier for Europe than that of industry watchers here in the states for one reason—Europe is where the steel is; especially the pristine, highly engineered steel needed for mega-sized wind turbine bearings. Without that, bearing makers here are left doing the best they can to fill orders while also searching—hoping would be a better word—for additional premium steel sourcing. And, unfortunately, domestic sources are virtually non-existent.

“The steel qualities used for the manufacturing of bearings are regulated by international standards, which are further refined in company standards to ensure that the steel has the quality required to produce premium-class bearings and to ensure a maximum of reliability,” says Thalmann. “The cleanliness is important mainly to achieve high-quality surfaces, to prevent stress peaks underneath the surface occurring due to inclusions, and to get superior heat treatment characteristics and results.”

Back stateside, Bob Hersko, vice president of sales and marketing for Aurora, OH-based Rotek, Inc. (a ThyssenKrupp Industries company), provides other insights into why such high-grade steel is needed for turbines, especially the 1.5MWs and 2.5MWs sprouting around the country. 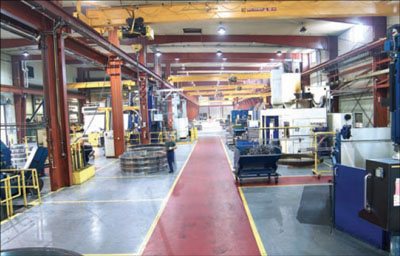 A look at Rotek’s Ohio facility. Its parent company is building a new plant that will better serve turbine bearing production’s space needs.

“The (turbine) bearings are heavily loaded; the raceways—especially on the pitch bearings—have to carry a significant preload in the system,” he says. “That’s only because if there was any evidence of clearance in there because of the vibration, or what is referred to as flitter, those raceways would spall. Any evidence of dirt—dirty steel—is just going to lead to those raceways failing prematurely.

“But in fact the bearings really don’t get rotated; they are pitched through 15° or so, but they really don’t go through 360° revolutions. So you have to be careful with lubrication, and if they do have any kind of surface impurities after the hardening process and so on, there’s going to be problems.”

Those “problems,” says Hersko, include an unwanted increase in torque, which in turn leads to an asymmetrical speed distribution among the three huge turbine blades, thus impairing proper rotation. And then, of course, there are standards to contend with, which pose challenges for bearing makers in design considerations beyond acquiring the steel.

With turbines, it’s demand first, supply second. Supply base—two little words that bring into sharp relief the problems facing OEMs and suppliers to the U.S. wind turbine industry. The demand for components is skyrocketing while suppliers are left scrambling to meet it. It is the central challenge facing the bearings industry, says Lage. 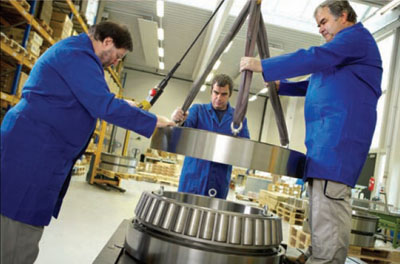 “The biggest issue today is that demand is far outstripping capacity. We have demand from multiple sources that far exceeds our ability to manufacture,” he says. And this is despite Kaydon’s recent $76 million investment in equipment and facilities (plus the recent purchase of Avon Bearings). “Other issues are delivery lead time on machine tools and availability of good, quality forgings in the size required for utility-class wind turbines.”

“Bearings for wind turbines are likely to become one of the highest growth segments for Timken into the foreseeable future,” says Das. “The U.S. has huge wind potential.”

And Rotek’s Hersko says that currently bearings for wind turbines constitute “around 40 percent or less” of its business. “It’s huge, and it could be five times that, but we tell manufacturers that we don’t want to promise something that we can’t deliver on.” He adds that ThyssenKrupp is in the midst of investing—after some necessary, farsighted concessions by the state—“hundreds of millions of dollars” in a new Aurora, Ohio-based facility “wholly dedicated to wind energy,” set to open by 2010 or sooner. The net result—over 300 new, good-paying manufacturing jobs for that community. He adds that ThyssenKrupp is building a $3.7 billion steel plant in Alabama. All of this on top of the land office business the company is currently doing in the aforementioned heavy equipment segment, here and abroad. 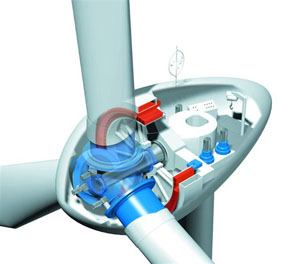 A look at a cutaway illustration of an intricate, Timken-designed bearing set for one of the larger wind turbines. 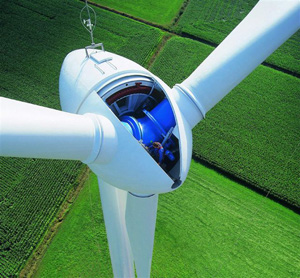 A birds-eye view of the machine room—including Timken-supplied bearings—of a wind turbine, which dwarfs the landscape. The sheer size of the components needed is a major reason for the ongoing supply chain bottlenecks frustrating industry OEMs and suppliers.

“I’ve been with Rotek some 30 years and I have never, ever, ever seen anything even remotely close to what this market is right now, here and offshore,” he says.

Size and R&D matter. So where does Rotek purchase the precious steel needed for production? “We have agreements with two offshore suppliers and three domestic suppliers,” he says. “Not all of them can supply the necessary sizes or material grades we want. But having said that, what we do is lock in blocks of time for six months (with steel suppliers). But if you’re starting from scratch—good luck. If you’re established (in the industry), it’s about a six- to eight-week wait for steel.”

At Kaydon, the picture is about the same. “We have multiple vendors domestically and overseas to support our demand because we’re dealing primarily with rings from 80 to 125 inches in outer diameter,” says Lage, “and many forging suppliers cannot handle the upper-size range.” Nevertheless, Lage pegs his company’s turbine bearings sales at about 25–30 percent, “And we expect that to continue to grow,” he adds.

And this in an industry that Lage and industry reports see growing as much as 40 percent annually for the foreseeable future. Care to do the math?

Beyond all of these supply-and-demand issues is the actual turbine bearings manufacture; bearings reliant on top-tier engineering and technology in order to ensure their performance, reliability and durability. To meet these challenges, what was done at Timken some years ago is a useful case in point. 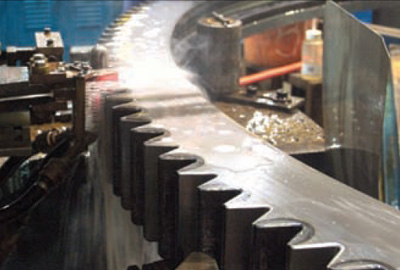 Like most wind turbine bearing manufacturers, Rotek is a one-stop shop. That includes gear hardening, as seen here.

“Back in 2000,” says Timken’s Das, “as part of getting into the wind energy business, the first thing Timken did was to create a team of engineers to look at the application—the kind of loads, duty cycles, etc.—and that team of 10 or 12 engineers worked on that for about five years.” One direct result of that R&D was what Timken calls its integrated flex spin bearing. “Those bearings were installed in 2004,” says Das, “and the gearboxes are still running without any trouble.”

At NKE, says Thalmann, there is a clear appreciation of the many complex factors involved in making bearings for such a demanding application.

“Bearings for large turbine gearboxes and mainshafts must fulfill the most stringent quality criteria, as— especially concerning the required lifespan and operational reliability—these bearings are used in one of the most demanding applications. Exquisite care has to be taken during the specification, design and manufacturing of the bearings and the calculation of the gearbox in order to fulfill the requirements set forth in the applicable standards, and by the customers and the official bodies governing the wind industry.”

Speaking of standards, Lage points out that “Wind turbine builders (here and abroad) follow standards established by Germanischer Lloyd (GL) and certify the entire turbine, so these requirements flow down to the component suppliers such as bearing manufacturers. Our design engineers take into account the GL requirements along with other design standards.” 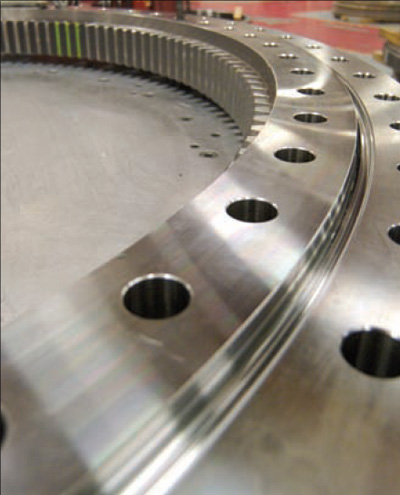 An up-close-and-personal view of a nearly completed wind turbine bearing at Rotek. (Photos courtesey of Rotek.)

Standards notwithstanding, what, exactly, is the turbine bearing of choice among designers? It depends, says Thalmann.

Space does not permit an in-depth look at some of the other exigencies involved in turbine bearing production, such as lubrication and heat treating, for instance, the “black magic” component of any acceptable turbine bearing. Software and other technology advances also play a big part. Look to further issues of PTE and our sister publication, Gear Technology, for more on those issues.

Late to the dance. OK; having cited the numerous supply chain bottlenecks retarding the continued growth of the U.S. wind turbine market—especially bearings—begs the question: Why is this happening? The reasons are many; some understandable, others perhaps having more to do with the current state of manufacturing in the United States.

Lage alludes to the projected 25 to 40 percent annual growth in explaining in part why most U.S. manufacturers capable of entering the turbine market were caught with their collective pants down. 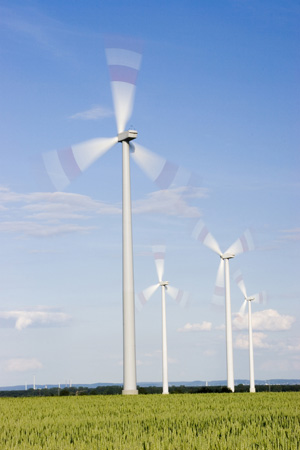 The design and manufacture of the gears, gearboxes and bearings for wind turbines are some of the most intricate and challenging in the industry. These turbines are fitted with Kaydon bearings.

“The growth was unexpected and actually appears constrained by component suppliers,” Lage says. “Ramping up operations for bearings, gears and forgings takes a lot of time versus an assembly operation.”

Says Hersko, “It came so fast. It was so subject to the whim and fancy of Congress with these PTCs (federal incentivizing production tax credits). And the best thing that ever happened to this industry in my mind is that (GE Energy) got into it and they are forcing issues now. I mean, the (U.S.) growth rate that GE is projecting is unbelievable.”

With that said, how long can U.S. wind turbine players expect the shortfall in bearings and other components to last?

“That’s the $25,000 question,” says Lage. “I think maybe a lot of bearing manufacturers are going to remain a little cautious (of ramping up production), because if this wind market repeats previous market declines, there isn’t enough non-wind business to soak up this new capacity.

“The forecasts from industry analysts and our customers are extremely positive, but Congress needs to pass long-term legislation so manufacturers have more stability and can continue their investments in wind.”