We use cookies to provide you with a better experience. By continuing to browse the site you are agreeing to our use of cookies in accordance with our Privacy Policy.
Home » Electric Car Safety

The innovative DIAvent pressure compensation element from Freudenberg Sealing Technologies provides pressure equalization in batteries for electric cars both during normal driving and for emergency venting in the event of damage or accidents. It is therefore an important safety feature for battery-powered vehicles. Freudenberg Sealing Technologies is now starting high-volume production of the component for the first time for use in a Chinese passenger car: DIAvent will help to ensure battery safety in the new ARCFOX α-T electric car from the Chinese manufacturer Beijing Electric Vehicles (BJEV). 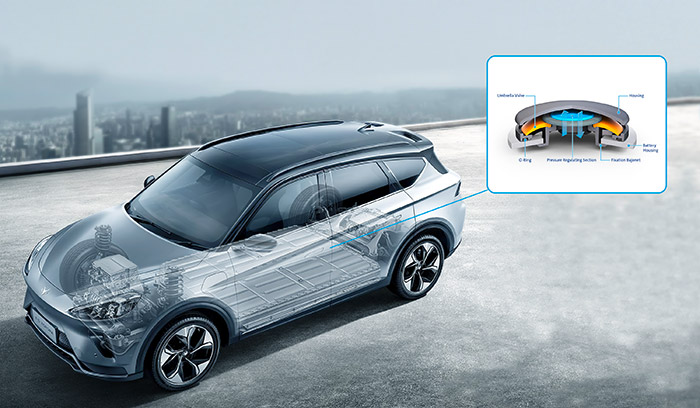 In 2017, Freudenberg Sealing Technologies introduced its innovative pressure compensation element DIAvent to the public: In batteries for electric vehicles, a valve consisting of two nonwovens with different properties takes over pressure equalization during normal operation. Excess pressure reduction during emergency degassing is handled by a reversible umbrella valve. As simple as it sounds, the solution is very technically sophisticated. While only a few liters of air per minute are exchanged in both directions during normal operation, in an emergency the entire quantity of gas emitted from a defective cell must be removed in a few seconds. Otherwise, the strong internal pressure - many times higher than the ambient pressure - could cause the housing to burst.

The trend towards battery systems with even higher energy density is another challenge. This is because it also increases the amount of gas that must be quickly removed in case of an emergency, as well as the amount of air exchanged during normal operations.

Freudenberg’s patented DIAvent valve replaces typically used microporous film like PTFE with a combination of two nonwovens with different properties. The water-repellent nonwoven fabric on the outside allows air exchange of approximately eight liters per minute at a low-pressure difference. And it is watertight up to 100 millimeters of water column. If the water pressure rises above this, a second inner layer of nonwovens is activated so that no water can enter the housing. Degassing in an emergency is made possible by an umbrella valve that is arranged in a ring around the nonwoven fabric. It opens reliably as soon as the pressure in the housing exceeds the atmospheric air pressure by more than 50 millibars and can then discharge 40 liters of gas per second. A major advantage of the DIAvent: the umbrella valve closes again at the end, making it easier to safely remove a damaged battery after emergency degassing. Since it reversibly opens and closes, it can also support pressure equalization in normal operation, for example when batteries with high energy density are exposed to rapid temperature fluctuations.

Another advantage of DIAvent is that it takes over the functions that are usually performed by two separate components — a breathing element and a bursting disc. This means it is more economical and easier to install for vehicle manufacturers, since only one component has to be installed.

Right after prototype production, several vehicle manufacturers expressed their interest and tested the pressure compensation element from Freudenberg Sealing Technologies. At the beginning of 2020, DIAvent went into series production for European customers for the first time. Two years ago, Freudenberg’s sealing experts launched a joint development and test project with the Chinese manufacturer BJEV, which was successfully concluded with an agreement for series production in 2020.

“The cooperation with BJEV was very intensive. We are very proud that our engineering expertise helps our customer to continue its road to success.” explained Liu Zehua, account manager and sales representative at NOK-Freudenberg. “With this project, Freudenberg truly demonstrated its global footprint: The company managed a complex global customer project with local sales in China, and engineering and production in Europe.” BJEV, which has been operating successfully in the Chinese automotive market for about 30 years, now wants to establish a stronghold in the European market as well. That is why cooperation with established local suppliers was important to the company, especially in view of the strict European safety standards for passenger cars.

“We are delighted that DIAvent is now going into series production for the first time at a Chinese OEM,” says Matt Chapman, president, automotive sales and marketing at Freudenberg Sealing Technologies. “The high demand for this product shows us that we know the needs of our automotive customers very well and that we are using our expertise precisely for innovations to support our customers in the difficult transition to electric mobility. And in doing so, we are also pointing the way to emission-free mobility in general.”


Freudenberg Sealing Technologies has expanded its material testing capabilities to include performance and compatibility evaluations of the rubber, elastomers and thermoplastics used to seal and safely maintain lithium-ion batteries. The company has installed sophisticated equipment and adopted new testing protocols in its Plymouth, Mich., Central Laboratory that will provide conclusive data on which materials optimally resist breakdown from constant exposure to harsh electrolytic solutions. Such data has not been readily available in the private sector until now.

The centerpiece of the six-figure investment is a specially designed Isolation and Containment Chamber (IsoC) that allows technicians to safely conduct exposure testing using the aggressive lithium electrolytic solutions found in lithium-ion battery cells. These solutions are volatile, toxic, and flammable when exposed to oxygen and ambient air moisture. The IsoC, a six-by-three-by-three-foot, two-chambered glass, and steel enclosure, allows chemists to work in a controlled, inert, and moisture-free environment.

“What we can now offer customers is design security based on scientific data,” said F. Joseph Walker, director research and development for Freudenberg Sealing Technologies in the Americas. “We have taken this proactive step on behalf of our customers and in response to a growing use of lithium-ion batteries in diverse applications. “Previous effort has been conducted to determine the impact of materials on the electrolyte. This work focuses upon the impact the electrolyte has on the materials.”

Multiple analyst forecasts project that the lithium-ion battery market will experience double digit growth during the next five years based on increasing battery use in the automotive, construction agriculture, mining, commercial truck, recreational vehicle, ship, train and electronics industries. In response, the lithium-ion battery developers are constantly exploring ways to make these sustainable energy devices more powerful, more robust and faster during recharging cycles. Electrolytic solutions have a direct impact on these performance issues. New and enhanced electrolytic solvents are being continuously introduced. While these solvents can result in a faster exchange of lithium ions between the anode and cathode sides of a battery cell — thus ultimately impacting energy discharge ad recharge rates — they also expose seals, gaskets and other battery components to a constant mix of reactive, flammable, caustic and hazardous chemicals. 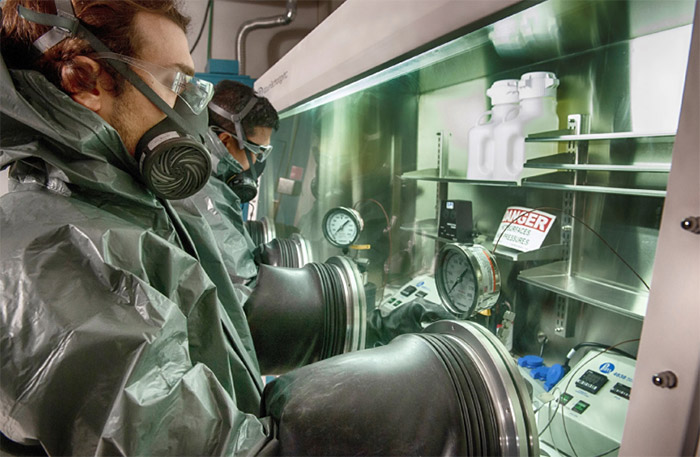 Freudenberg Sealing Technologies continues to build its lithium-ion battery expertise with the installation of a sophisticated Isolation and containment chamber in its Plymouth Central Laboratory in the United States.

Freudenberg Sealing Technologies has spent decades performing comprehensive physical and analytical material testing to document the performance and compatibility of materials that are exposed to different fluids, materials and stress conditions. The data base the company has assembled from the results provides specification guidance and material benchmarks for the components it sells to customers.

Lithium-ion material testing, however, requires a unique set of inputs to safely succeed. The new equipment and test methodology being used in the Central Laboratory provides these inputs.

“All of our exposure testing must be performed inside the IsoC in an oxygen-free, moisture-free environment,” said Freudenberg Sealing Technologies’ Michael Saruna, the Central Laboratory chemist who is in charge of material testing in electrolytic solutions. “Electrolytic solution exposed to air can result in a hazardous situation, so we had to take safety and our ability to maintain a controlled environment into account during the design of the IsoC.”

The dual chambers of the IsoC allow Saruna to install test samples in the first chamber, purge all air, oxygen and moisture from that space and then move them to the second, larger IsoC chamber for exposure testing. Materials will be immersed electrolytic solution for at least 1,000 hours, then decontaminated to insure they are safe for removal from the IsoC. They will then be subjected to the company’s standard physical and analytical test methodologies.

Freudenberg will use two electrolytic solutions in its immersion testing — one that is commonly used in lithium-ion battery cells and one that has been has been manufactured as a control. The company will test families of materials, beginning with its own unique and proprietary materials and then moving on to test commercially available materials that are used in these batteries.

“Benchmarking will provide us with the ability to spot gaps in compatibility and performance,” Walker said. “Then we can develop material programs and components to fill those gaps.”