We use cookies to provide you with a better experience. By continuing to browse the site you are agreeing to our use of cookies in accordance with our Privacy Policy.
Home » An Inside Look at Bell's EDAT System

An Inside Look at Bell's EDAT System

An Inside Look at Bell’s EDAT System

Bell’s Electrically Distributed Anti-Torque (EDAT) is Bell’s latest commercial innovation, unveiled in February 2020. The EDAT system is composed of four small fans within a tail rotor shroud in an offset two-by-two pattern. Each of the rotors contains four blades, and they are powered by four separate motors with the electrical energy provided through generators driven by the turbine engines.

This innovation provides enhancements to reduction in noise pollution compared to an aircraft with a conventional tail rotor as well as lower operational and maintenance costs. Throughout the year, Bell’s EDAT innovation has garnered interest as the first technology of its kind in the rotorcraft industry, challenging the norms for aircraft noise output, safety, and electrical distribution.

“We replaced conventional drive system components—gearboxes, driveshafts, etc.—with electric motors and electric generators that power the motors,” said Eric Sinusas, director, development programs at Bell. “We took an existing helicopter, the Bell Model 429, and we stripped out all the classic drivetrain components that power the tail rotor and we replaced it with the EDAT system.”

“One of the main drivers for rotorcraft noise is the tip speed of the blades—with a conventional system the tail rotor is mechanically-linked to the engine through the drivetrain,” Sinusas said. “With an electrically driven propulsion system, we’re able to change the speeds and control thrust by varying the speed of the electric motor driven fans. As a result, we can reduce the tip speed in most operating conditions.” 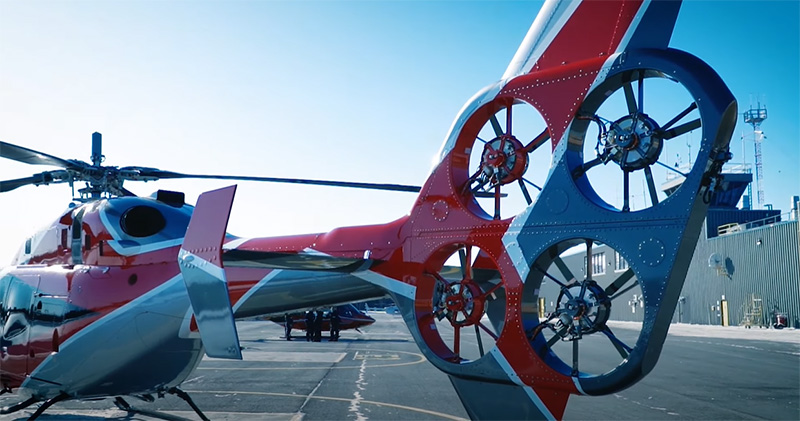 This results in the ability to shut down the tail rotor completely when you hit a certain forward air speed, for example. In conventional mechanical systems, the tail rotor is always spinning at 100-percent rpm.

Rotorcraft safety is another area where the EDAT system thrives.

“When the aircraft is on the ground, we can completely shut off the tail rotor,” Sinusas said. “In a conventional system during warm-up or cool down, the tail rotor is going to be running and linked to the engine. If you’re an EMS operator on the side of the highway loading patients into a standard rotorcraft, the tail rotor is still running. The EDAT presents an opportunity to keep ground crews safer as they work around the vehicle.”

If the aircraft loses one, two or three fans due to a mechanical failure or a bird strike, the pilot can still get the rotorcraft to the ground safely with the EDAT system. Operating costs also go down by removing the gears, bearings, couplings, and any lubricated components that require additional maintenance.

“Our team at Bell is focused on innovation,” Sinusas said. “Research and development is something we take very seriously and we’re investing strongly in these areas. The team continues to design, build and fly new innovative solutions by applying a unique approach to meet the needs of current and future customers.”

Bell rebranded its name back in 2018, dropping “Helicopter” to reflect that the organization is evolving into something much more than just a helicopter company. With an emphasis on innovation and technology, it will be interesting to see where the organization pushes the boundaries of flight in the future.